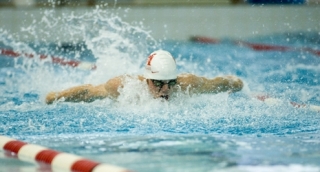 MONTREAL – McGill is sending five men and four women to the CIS swim championships, Feb. 19-21, where the best varsity swimmers in the country meet at UBC’s Thunderbird Aquatic Centre, in Vancouver, B.C.

Steven Bielby, a freshman from Pointe Claire, Que., is McGill’s best medal hope and has qualified for eight events, including the 100, 400 and 150-metre freestyles, the 50 and 100 backstrokes, the 200 butterfly, plus the 200 and 400 individual medleys. He will be bidding to become the first member of the Redmen to medal at Nationals since 2007, when Ryan Tomicic won gold in the 50 free.

On the women’s side, captain Danielle Hetherington, a senior from Niagara-on-the-Lake, Ont., has qualified for the 200 individual medley and the 50 back.

Other qualifiers include senior Kristyna Cleminson (50 breast), of Belleville, Ont., freshman Leanne Roach (100 & 200 breast) of Gander, Newfoundland and Valérie Grand’Maison of Fleurimont, Que., who will compete in the relay events. Grand’Maison, who is visually impaired, was Canada’s most decorated athlete at the 2008 Paralympics in Beijing, with three gold medals, a pair of silvers and one bronze.

The Martlets will be seeking their first medal at Nationals since 2005 when Heather Bell won a silver (100 breast) and two bronzes (50 & 200 breast). The team’s last CIS gold medal was won by Michele Laprade, who won the 50 breast in 2004.

The event is scheduled to run Thursday through Saturday, with daily preliminary sessions at 10 a.m. and finals at 6 p.m. (Pacific time).

For all the information on the meet, including live results and video webcast of all sessions, visit: www.cisport.ca/e/championships/swimming/2009