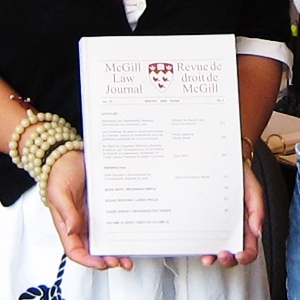 The Australian Research Council (ARC) has ranked the McGill Law Journal among the best English-language law journals in the world.

The ARC, as part of an initiative to assess the quality of research within Australia's higher education institutions, examined and ranked 7,000 English-language humanities and creative arts journals, including law, from around the world. Using four tiers of quality rating (A* = top 5%; A = next 15%; B = next 30%; C = bottom 50%), it assigned rankings to 1,265 law journals, which included three McGill Law publications.

Founded in 1952 by students of McGill’s Faculty of Law, The McGill Law Journal is a bilingual, bijuridical journal that student-run and peer-reviewed. Published on a quarterly basis, it is one of the publications most often cited by the Supreme Court of Canada and has readers in over 40 countries. The McGill Law Journal also publishes the Canadian Guide to Uniform Legal Citation, whose seventh edition is forthcoming.

The Faculty of Law extends its congratulations to the three journals for this recognition of the quality and relevance of their scholarly work.