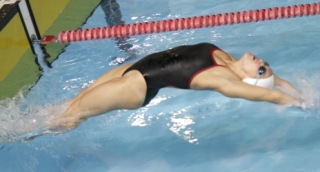 MONTREAL - McGill will host the fourth Quebec Cup swim meet on Saturday afternoon at Memorial pool in the Currie Gym. Admission is free of charge and it is the team's only major meet at home as the season winds down for the league championships at the Université de Montreal, Feb. 12-13, followed by the CIS championships in Calgary, Feb. 24-26.

To date, 21 McGill swimmers have now qualified to compete at the Nationals

Some 121 swimmers from seven universities are slated to compete at McGill this weekend, representing McGill, the Montreal Carabins, Laval, Sherbrooke, UQTR, UQAC (Chicoutimi) and the Université de Quebec a Outaouais (UQAO).

This will be only the second meet since the McGill squad returned from a nine-day training camp in Boynton Beach, Florida, Dec. 28 to Jan. 6.

"It was a great camp as we shortened it from 15 days last year and we found that our swimmers were able to stay more focused," says Peter Carpenter, in his second season as head coach at McGill. "We pushed them really hard and they've come back in better physical condition. However, we're going to be missing four or five of our swimmers this weekend due to a bug that has been going around the team. But it's going to be our last opportunity to show where we stand before going to the provincial and CIS championships. Our schedule is designed for us to peak at the two championship meets and I'm anticipating some great times."

Among the men expected to shine this weekend is veteran Steven Bielby of Pointe Claire, Que., and freshman Pierre-Alexandre Renaud of Laval, Que. Bielby, who is one of McGill's most decorated athletes, is expected to post great times in the 100 butterfly and 200 freestyle, as well as the grueling 1500m.

On the women's side, three athletes to focus on would be sophomores Myriam Donato of Pointe Claire, Valerie Grand'Maison (800 freestyle) of Fleurimont, Que., in addition to freshman Rayven Snodgrass of Calgary. They will each be swimming in the 400 individual medley, among other races.