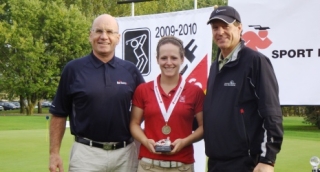 MONTREAL -- McGill golfer Mélissa Coré, of Beaconsfield, Que., has been selected as the De Facto Quebec university female athlete of the week, for the period ending Oct. 4, 2009.

Clément Herviou, a golfer with the Montreal Carabins, is the male weekly winner.

Coré won the Quebec university individual golf championship at Club Deux-Montagnes over the weekend, helping the Martlets to a second-place finish overall. The 23-year-old post-graduate student in management, shot rounds of 71, 76 and 76 in rainy conditions to finish the season with an overall score of 300 after her previous best round of 77 was factored in.

She captured the QSSF crown by five strokes, beating out Laurence Mignault from the Montreal Carabins. Coré, who becomes the first McGill golfer to capture the conference title, is a 2008 graduate of UBC, who previously attended John Abbott College.