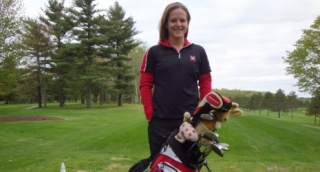 Fredericton, N.B.  -- McGill University's Mélissa Coré of Beaconsfield, Que., settled for a 20-over par score of 236 after three rounds to finish 12th overall and 13 strokes behind the leader at the 2010 Canadian collegiate golf championship at Kingswood Park. The championship was shortened to 54 holes after heavy rainfall on Thursday that rendered the course unplayable and forced the cancellation of the final round.

Coré, a post-graduate student in management, is one of five Canadian women to qualify for the FISU world university golf championships in Antequera, Spain, June 7-11.

The University of Victoria's Anne Balser battled back against UBC's Kylie Barros to capture the women's individual competition. The two were tied for first after the third round, at 223 (+7), with rounds of 75-74-74 for Balser and 73-74-76 for Barros.  Balser emerged victorious from a playoff held Thursday. Taking third place was Jocelyn Alford from the University of British Columbia, who shot 75-77-74 - 226 (+10).

"I definitely have played four years to get to this point, and it's finally worked out," explained Balser. "Having great teammates has added that much more confidence to play well and it just worked out in the end. You have to step it up because the weather really beats you down, and it comes down to who can last longer, because Kylie is a really good player."

Université Laval captured their first men's title while UBC continued to dominate the women's competition, earning their seventh championship title in eight years. Their only loss in the championship's history came in 2008 at the hands of  their B.C. rivals from the University of Victoria. The women's team carded three double-eagles, four eagles, and two birdies over the competition.

"I would definitely say that they worked really hard all year and Chris [McDonald], head coach, focused a ton on their short game -- that was consistent all year," explained women's coach, Keri Moffat. "I think they just peaked at the right time and coming into this they were excited but they just focused on having fun. They are tired, but still very excited."

The team that included Jocelyn Alford, Vanessa Leon, Lindsay Manion, Kylie Barros and team captain Alyssa Human, remained consistent throughout the week. They finished with a  three-day team total of 901 (+37).

Victoria took home runner-up honours after shooting a team total of 926 (+62). Rounding out the top three was the Université de Montreal with 992 (+128).

Laval dominated the men's side. In a position that has traditionally been traded over the years by UBC, Victoria and Humber College, this was more than a win for Laval, it was a defining moment. The team played strong and came out on top with a three-day total score of 867 (+3) that included four double-eagles, six eagles, and seven birdies. Tied in second at  10 strokes behind was Humber College and UBC with a score of 877 (+13).

"We are very pleased with this achievement," said Gingras. "We have been preparing for this for several years. For the last two years, we've been going to a program in Florida, the team trains in Florida all winter. These young people are so passionate about the game which is great for us. As for the weather, we were a bit lucky to be able to count on bad weather but on the other hand, we were in good shape after the third round. That was the game plan and I think it's been a long time coming."

"You don't know what to expect with a playoff and we had to determine a winner. Mitch is a good player but I'm for sure happy with the way it ended," said Bannon.

Final round results from the 2009 Canadian University Collegiate Championship are available at www.rcga.org/championships.