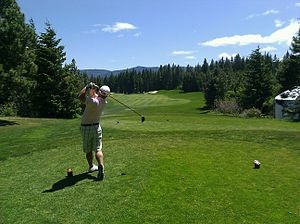 RIMOUSKI -- The McGill University golf team begins its season on the road this week at the Bic Classic hosted by the Université du Québec à Rimouski, Aug 29-30. This two-day, 36-hole event is the first of three events in the RSEQ university golf circuit.

After 10 days of trials, McGill head coach Bob Dubeau has selected the five players that will compete in the first event of the season. These players include management juniors Ryan Boyd out of the Royal Montreal golf club and Brian Neill from the Rivermead club in Ottawa. Also on board is Ben Miquel, an engineering junior from Houston, Texas, Tom Calvet, a management junior from Nice in Fance and Thomas Sinclair, a science sophomore from St Lazare who plays at the Whitlock club.

Additional players could be in place for the next tournament following a second phase of team trials which will end on Sept 7.

The McGill women's team, known as the Martlets, has not been entered in this week's event and their schedule will begin on Sept 15-16 at the Lachute Classic hosted by École de technologie supérieure (ETS) and played at the Lachute golf club. The Redmen will also compete in this tournament.