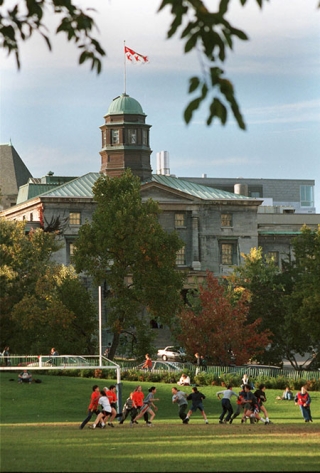 Among the 24 Canada Research Chairs awarded to McGill University that were announced this morning at Concordia University, the work of one particular researcher offers hope for Canada’s ageing population.

It’s a common problem. When people get a hip replaced, or a tooth implanted, some will be fine. But for others there is discomfort, along with infections, and the implants need to be replaced. McGill Engineering researcher Marta Cerruti explains: “That’s because within a few minutes of an operation, proteins start to adhere to the surface of the implant. If the right proteins adhere, then all is well. But if the wrong proteins adhere to the implant, the body forms a fibrous capsule around the implant to isolate it and a new implant needs to be inserted.”

Cerruti, the newly named Canada Research Chair in bio-synthetic interfaces, is on a quest. She wants to find a better way for implants – whether for bone or soft tissues – to integrate within people’s bodies. The answer, she believes, lies in building biodegradable scaffolds that combine both organic and inorganic materials. “The synthetic material should be able to communicate to the living, biological material how to react. And then, once the desired reaction has occurred, the synthetic material should disappear so that you’re left with your own body and nothing else.”

“The interface is important,” says Cerruti. “I want to try to make scaffolds with a surface that can communicate with the body and tell it what you want it to do,” she explains. “That way, you’re not just hoping that the body will do what you want it to. Instead, you’re directing it to do what you want, thanks to the molecules that you put on the surface. For example – if you want to regenerate bones, you need cells in the scaffold that will encourage the formation of hydroxyapatite (the mineral component of bones) in the body.  But if you want to have a scaffold that helps cartilage regeneration, you won’t use the same molecules on the surface. What I’m trying to do is make materials that speak the body’s language.”

The other McGill recipients of Canada Research Chairs announced today are:

For more information on the Canada Research Chairs: http://www.chairs-chaires.gc.ca/