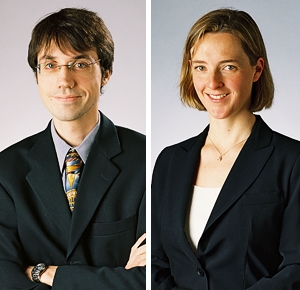 The Faculty of Law was delighted to learn that two of its recent graduates have received Trudeau Scholarships. Jonas-Sébastien Beaudry, BCL/LLB ’04 (on left), and Kathryn Chan, LLM ’06 (on right), were among the 15 doctoral students who received one of the prestigious scholarships awarded by Pierre Elliott Trudeau Foundation.

The Trudeau Scholarships will help them work on some of the crucial questions that face the world today and enable them to make a significant contribution to research. Jonas-Sébastien Beaudry is examining social exclusion in Latin America with a view to promote equality and better integration of various social groups, while Kathryn Chan is looking into ways to modernize the law to better support or regulate voluntary and not-for-profit organizations in Canada.

“Trudeau Scholarships not only accelerate the careers of those who receive them, but also enable recipients to make a significant contribution to Canada and to Canadians. We reward excellence and provide young doctorate students with the best conditions to ground their work in the real world,” said Foundation President P.G. Forest.

The annual $60,000 bursaries, for up to four years, subsidize tuition fees and living expenses and allow the Scholars to travel for research and scholarly networking and knowledge dissemination. The Trudeau Scholarships are the most generous awards of their kind in Canada.

An independent and non-partisan Canadian charity, the Pierre Elliott Trudeau Foundation was established in 2001. The Foundation supports outstanding individuals who make meaningful contributions to critical social issues. To date, the Foundation has granted close to 200 major awards in Canada and abroad. More at www.trudeaufoundation.ca.