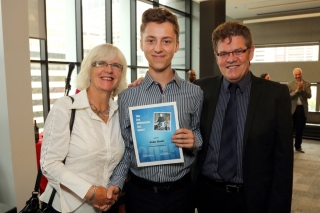 John Buck, Jazz Drums, BMus'18, was named the recipient of the first Lou Williamson Jazz Award  yesterday in a ceremony held at the Schulich School of Music.  This award was  established in 2015 by Chris and Eve Millington in memory of the gifted jazz percussionist Lou Williamson .  Williamson was a former McGill instructor and was also a highly respected music administrator.

The award is given to an outstanding Canadian undergraduate or graduate student registered in a Jazz program, with a preference for Jazz drum set, on the basis of high academic standing, and is accompanied by a cash prize of at least $4000 annually.   The Lou Williamson Jazz Award is the largest merit-based award in jazz at the Schulich School of Music.  John Buck, originally from Calgary, is a student of Chris McCann.