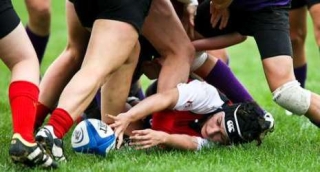 The result clinched third-place for McGill in the six-team conference. Both McGill and Ottawa finished with identical 3-3 records but Ottawa was relegated to fourth-place as they split their two-game series with the Martlets, who had outscored Ottawa 24-19 in head-to-head matchups.

The Martlets, who led 12-5 at halftime, had eight points from veteran Steph Lynam of Beaconsfield, Que., who registered a pair of penalty kicks and added a conversion.

Other McGill tries were notched by sophomore Jessica Wong of Toronto and Mandy Mongeon, a senior from Ile-Bizard, Que., who opened the scoring in the 15th minute of play.

Lana Dingwell of Ottawa and Natasha Watcham-Roy of Val des Monts, Que., accounted for all of the Gee-Gees points, with one try apiece in addition to a conversion by Dingwell.

"I was pleased with our performance tonight," said head coach Vince deGrandpre. " Although we made a number of mistakes early in the game and took some penalties which kept the game close in the first half, we finally got our act together after halftime and I think that Ottawa was in our end only a few times for the remainder of the game."

A less than pleased Ottawa head coach Suzanne Chaulk was clearly frustrated with her team's inability to sustain that momentum: "The try we scored in the first half was a beautiful team try, and it looked like we had great momentum and we were going to do something with it. But then we decided not to play, took a million penalties, and made stupid decisions."

McGill will now meet second-place Laval (4-2) in a semifinal affair, slated to be played Saturday at 1 p.m. in Quebec City. The Rouge et Or won the only meeting between the teams this season, with a 27-12 conquest in the provincial capital.

The Martlets are on a bit of a roll, winning two of their last three games, sandwiched around a hard-fought 30-20 setback to the undefeated Concordia Stingers.

"We have a young team and have been working towards just making the playoffs," deGrandpre added. "We are right where we want to be and we'll give Laval a tough game."

The other semi will pit Ottawa against division-leading Concordia (6-0) on Sunday.