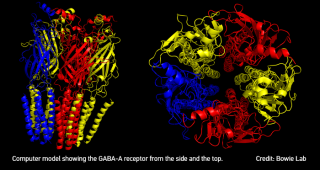 Insulin has long been known as the hormone which controls the body’s sugar levels: humans who lack or are insensitive to insulin develop diabetes. Although insulin is also made and released in the brain, its effects there have remained unclear.

Now, researchers at McGill University have discovered a new role for this metabolic hormone. “We discovered that insulin controls the activity of the brain’s ‘brakes’, which are called inhibitory GABA-A receptors, says Dr. Derek Bowie, a Professor in the Faculty of Medicine’s Department of Pharmacology and Therapeutics.  “Insulin prevents the brain from getting overexcited by calling upon a subtype of GABA-A receptors--a discovery which may lead to new treatments for epilepsy and other central nervous system conditions.”

An alternative to psychoactive drugs?

“GABA-A receptors are targeted by many psychoactive drugs such as benzodiazepines (e.g. valium) which are used to treat anxiety, induce anesthesia in surgery and relieve chronic pain,” says Bowie who is also the Scientific Director of the FRQS-funded research group, GÉPROM. “Although beneficial, these drugs often have unwanted side-effects. We found that regulating the brain's own chemistry using insulin brings about the same beneficial effect of these drugs, suggesting new routes for drug therapies that may have fewer side-effects."