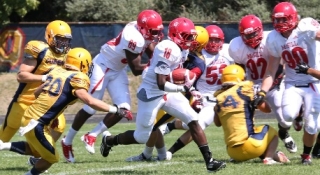 (Rookie Shaquille Johnson of Toronto, led the Redmen in all-purpose yards with 196, including 129 on kick returns and a game-high 69 yards on six receptions. PHOTO BY DEREK DRUMMOND)

KINGSTON - The McGill Redmen football team had a somewhat inauspicious debut in their 132nd season-opener at Kingston, Sunday, dropping a 23-9 decision at Queen's in preseason play before 1,387 at Richardson Stadium.

It was the first confrontation in five years between these long-standing rivals and the Gaels improved to 101-74-5 lifetime against McGill, in a series that dates back to 1884.

The Redmen had a plethora of scoring chances, most in the second half, but continually shot themselves in the foot with 19 penalties for 148 yards, compared to the Gaels, who committed only six infractions for 65 yards.

"The outcome wasn't that important today," said second-year Redmen head coach Clint Uttley, who indicated that evaluation of new players in various positions and how hard players were prepared to com pete for the full 60 minutes was utmost in his thoughts.

"The biggest thing was that we had 19 penalties... I think we had 10 holding calls. That's just completely unacceptable, especially at a school where most of our kids are pretty smart... The 19 penalties absolutely decided the football game today."

Queen's opened the scoring at 8:07 of the first quarter, when quarterback Giovanni Aprile connected on a long bomb with receiver Billy McPhee. Their only other scoring major was a 32-yard TD toss from Austin Geddes to Tim Godber, which gave the Gaels a commanding 22-2 advantage late in the third quarter.

Rounding out the scoring for Queen's was freshman kicker Dillon Wamsley, who added five points, including a 47-yard field-goal, followed by a wind-aided 85-yard rouge on the ensuing kickoff. The team's remaining points came from a pair of safeties, two rouges and a conversion.

McGill's lone TD featured sophomore quarterback Dallon Kuprowski of Ottawa, hooking up with Mathieu Lepage, a freshman from Trois-Rivieres, Que., to make the score 23-9 with five minutes remaining. Kuprowski was good on 10-of-18 for 97 yards and one touchdown.

"We executed to a certain extent (on offence) and set the tempo that we wanted to set," said the shifty 5-foot-10, 205-pound pivot who, at times, appeared to be running for his life in the game. "We obviously didn't anticipate this many penalties, so from this point forward, we just need to clean up the penalties and we can execute and play with any team that we face this year."

McGill had a dozen battles for starting spots up for grabs but none more pressing than at quarterback. Ryne Bondy, a fifth-year senior who started in 2010 but lost out to Kuprowski last year, got the start and completed 12 of 20 attempts for 118 yards. Jonathan Collin, who started in 2009 but sat out most of the past two seasons with injury, went 3-for-9 for 21 yards. None of them were picked off and they combined to find 13 different receivers in the game.

In addition to the quarterbacking battle, Coach Uttley revealed that there are a half-dozen starting roles up for grabs on defence, plus all five receiver spots.

Rookie receiver Shaquille Johnson of Toronto, was a constant bright light for the Redmen, registering a game-high 196 all-purpose yards, including 129 on kickoff returns and a game-high 69 yards on six receptions. To put that into perspective, his individual kick return total was higher than the team KOR totals compiled by McGill last year in eight of their nine regular-season contests.

Luis-Andres Guimont-Mota, a highly-touted running back out of College F X Garneau in Quebec City, was McGill's top rusher with 24 yards on six carries, one more yard than senior Taylor Kuprowski, the older brother of the team's quarterback.

Alex Hutchison, Louis Morrissette and Brenden Carriere led the Redmen defence with four tackles apiece, including one QB sack for Hutchison. Other sacks were made by Tyler Lavin and David Deku.

The Gaels resvonded with four sacks of their own against a young McGill offensive line that has been missing Laurent Duvernay-Tardif, their 6-foot-5, 280-pound anchor, a third-year medical student who has been sserving a stage in northern Quebec and has missed the entire training camp. He is expected to rejoin the team this week.

McGill newcomer Simon Lamontagne, a transfer from the Universite de Sherbrooke, made the game's only interception and also gobbled up a fumble recovery.

McGill opens the regular season at Laval on Sunday at 1 p.m. in a game that will be televised nationally on SRC, the French-language network of the CBC. Queen's opens their OUA campaign when they play host to York on Labour Day.

REDMEN RAP: Fifth-year veterans Taylor Kuprowski (offence) and Charles-Evens Peltrop (defence) served as co-captains in the game... There will be two or three other captains named after the final cuts are made over the next few days... McGill dressed 70 players, 20 more than normal for a regular season game... Queen's had 91 players in uniform...  Kicker Tomas Silva, who led the Quebec league in punting average last season,  is back for his final campaign with the Redmen after CFL tryouts in Winnipeg and Hamilton... Even though the Redmen were in position to kick three field-goals during the game but they elected to gamble on each occasion... Silva may also be handling the field-goals in wake of the graduation of Austin Anderson... The kickoffs were performed by rookie Samy Rassy, who averaged 47.7 on three knicks... The game took two hours and 59 minutes to play and the Redmen were forced to spend almost as long (2:24) at Richardson Stadium after the game, waiting for the team bus to show up as the driver was required by law to wait out an eight-hour break before driving a second shift on the same day.