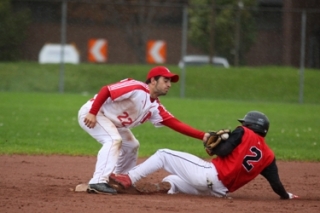 COTE ST. LUC, Que. - Second-baseman Ryan Favretto of Kirkland, Que., went 3-for-3 with three doubles and four runs batted in from the ninth spot in the batting order as McGill skunked John Abbott College 10-0 in Canadian Intercollegiate Baseball Association, Wednesday. the result salvaged a doubleheader split at Pierre Elliott Trudeau Park and clinch the final playoff berth for McGill in the CIBA North Division standings. The game was shortened to five innings on a mercy rule.

Starting pitcher Daniel Kost-Stephenson of Westmount, Que., tossed a three-hitter for a complete game shutout. He struck out seven and walked two batters.

As a result, McGill, which dropped the opener 4-2 to the Islanders, will not play the remainder of last week's suspended game against Carleton. That contest was called in the 10th inning with a 3-3 tie due to excessive water on the field. It had been rescheduled to be completed on Oct. 6 but had no bearing on the standings and Carleton indicated that they would have problems fielding a full lineup for Thursday, so the game will go down as a tie.

The defending national champion Redmen, who finished fourth with a 6-9-1 record, will now take on first-place Concordia in the CIBA North best-of-three semifinal. That series is scheduled to open with a doubleheader Sunday at Trudeau Park, beginning at 12 noon. If a rubber match is needed, it will be played at the same venue on Thanksgiving Monday, at noon.