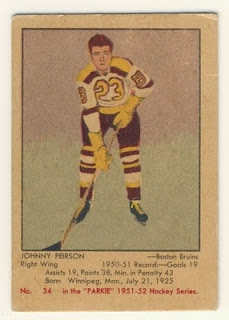 Johnny Peirson (full name John Frederick Peirson) was born in Winnipeg, Manitoba on July 21, 1925. After playing one season of hockey for the McGill University Redmen in 1945-46, he made the jump to the American Hockey League and a short time later, moved up the ladder to the NHL, where he had an extended playing career - 11 seasons - with the Boston Bruins from 1946 to 1958.

He played in the NHL All-Star Game twice (1950 and 1951) and had a 50-point season, a career-high, in 1951-52. Upon his retirement, he went into an extended broadcasting career as a hockey analyst, initially in the radio world and then in the land of television during its relative infancy.

"My career has been one of complete accidents," he once described his hockey career, both on and off the ice. The quote came from Frank Pagnucco's 1985 book Heroes: Stars of Hockey's Golden Era.

Peirson was a student at McGill when the Bruins gave him a pro tryout with their farm team, the AHL's Hershey Bears.

"I gave it an opportunity for a year or two," he recollected. "The money that was there was not very substantial but I could save some money and if I didn't get too far I could always quit and go back to school."

Peirson made the Bears roster in 1947 and impressed immediately. He would end up splitting the first couple of seasons between the Bears and the Bruins.

By 1948 Peirson became a regular for the Bruins for the next decade.

Peirson adequately described himself as an "above average, not great" player.

"I would say I was above average because I was a better balanced player, a forward that knew how to back check. The only thing I wish I had done was to work more diligently on my upper body strength because I would've been a better player. I lost a lot of battles and wasn't able to do what I would like to have done from the point of view of strength. But I had some defensive skills as well as being able to find the net sometimes."

He added another 10 goals and 26 points in 49 career post-season games, but the Bruins never won the Stanley Cup with Peirson on the roster.

"Boston was never a powerhouse but we had some representative teams. Nobody blew us out of the building. There are some very bad teams today that would've been even sadder in our day."

Peirson retired in 1958, because his "legs sort of disappeared." He did not want to uproot his family just to extend his hockey career in some minor league city in the middle of nowhere. Instead he went to work at his father-in-law's furniture manufacturing plant, a job he would hold for many years.

Peirson also managed to remain in the Boston hockey market thanks to landing a role of colour commentator on Bruins television contests. Former B's coach Lynn Patrick got Peirson the gig, first in radio then moving over to TV.