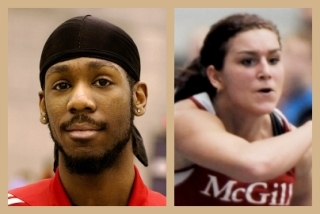 MONTREAL - Justin Darlington of Montreal and Hayley Warren of Orillia, Ont., are the McGill University athletes of the week for the period ending Mar. 14, 2010.

Darlington, a 21-year-old marketing freshman who has earned instant fame on YouTube under the moniker "Jus Fly", won silver and bronze medals at the CIS track and field championship meet last weekend in Windsor, Ont. They marked McGill's first medals at Nationals since 2006 when the Redmen won gold and bronze. Darlington was second in the men's high jump with a leap of 2.04 metres and placed third in the triple jump at 14.87m. The 6-foot-4, 169-pound rookie missed school records in both events by three centimetres and earned CIS second-team all-Canadian honours for his silver-medal performance. Darlington previously attended J. Clarke Richardson high school in Ajax, Ont.

Warren, a 19-year-old kinesiology freshman, captured bronze at the same CIS track meet. It was the first medal at Nationals by a McGill woman since 2003. The 5-foot-3 sprinter was clocked at 8.79 seconds in the women's 60-metre hurdles, where she finished third overall. Prior to enrolling at McGill last fall, she graduated from Patrick Fogarty Catholic secondary school in Orillia.