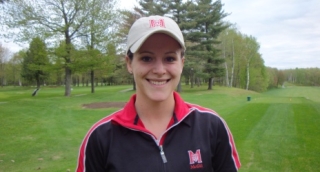 TROIS-RIVIERES, Que. -- McGill's Melissa Coré of Beaconsfield, Que., shot scores of 81 and 78 on a difficult course under cold  and windy conditions over the weekend to win the QSSF's second golf tournament of the season and lead the McGill Martlets to their first-ever intercollegiate golf tourney victory with a first-place finish at Le Marthelinois in Trois-Rivieres, Que.

Coré, a 23-year-old post-graduate student in management, beat out UQAM's Karine Desroches by two strokes and the Martlets fired a team total of 324 to edge out the Universite de Montreal by 15 strokes.

The McGill men's team had a difficult weekend but Aidan Brownlie continued his strong play shooting scores of 76 and 78 for a top five finish. Brownlie had been tied for the lead after the first round.  McGill's second ranked player, Sam Mamane, was unable to play this weekend due to  religious holidays.

The third and final tournament in the Quebec conference will be held in two weeks at the Deux Montagnes course. The three-day event will determine the QSSF's team and individual champions. The team title is determined by a seven-round team total over the season, while the individual championship is based upon the total score from the final tourney, plus the best score from the previous four rounds.

The Redmen remain in the hunt for a top three finish while the Martlets are poised to win their first-ever league championship.