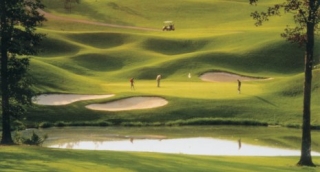 Coré, a 22-year-old graduate student in management, played a solid round in trying conditions to complete the weather-shortened 27-hole event with a 2-over par 110 total, seven shots ahead of her closest rival. She also qualified for a berth at the Canadian university championships at King’s Forest Club in Hamilton, Ont., May 25-27.

The only previous McGill woman to capture a tournament was Victoria Kayser, who won the Laval Invitational last September.

The Carabins shot a 40 to win the women’s team category, based upon their top three individual scores each day. UQTR shot 77 to finish a distant second.

On the men’s side, McGill placed second overall, led by Aidan Brownlie, an engineering senior from Springfield, Mass., who placed third in the individual standings with a seven-over par 115. Hugo Lauzon from the Montreal Carabins won the individual title with an even par. Teammate Philippe-André Bannon fired a four-over to finish second.

McGill led the team category by two strokes after the opening day but had difficulty in cold, windy conditions on Sunday. The Carabins took the team event with a score of 452, followed by McGill (475) and UQTR (479).

It marked the first time that McGill finished ahead of UQTR in a tourney since they became funded by their golf alumni association in 2006.

The tournament was reduced to a 27-hole event as play was stopped after nine holes on Saturday due to the heavy rains. The weather on Sunday was dry but cold and windy, featuring a temperature that had plunged to 4 degrees by the conclusion of play.

“It was a positive note on which to end the 2008-09 season,” said McGill head coach Bob Dubeau. “The outlook for next season looks very promising for the women’s side as we are expecting everyone back and will be in contention to capture both the Quebec individual and team titles. The men’s team will lose three of our eight players to graduation and will need to land two quality recruits to maintain their competitive edge next season. Our goal will be a podium finish and a berth in the 2010 Canadian championships.”