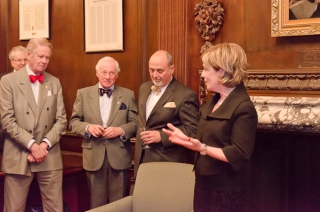 On October 29, 2013, the Faculty of Law held a reception in the Common Room to honour the memory of Alex Konigsberg QC, BCL’63, and to also mark the launch of the Alex Konigsberg Management & Law Bursary.

The Faculty of Law was privileged to welcome Mr. Konigsberg’s widow, Vivian Konigsberg, and many members of his family. Several of his friends, colleagues and former McGill Law classmates also attended.

Gordon Echenberg, BCL’64, who was a key champion in establishing this bursary, gave a very touching tribute to Alex Konigsberg, his life and work, and their friendship.

Vivian Konigsberg also spoke, explaining that Alex had always had an interest in one day mentoring young people who were starting up a business, and that this fund would have met his approval.

Alex Konigsberg, one of the founding partners of the firm now known as Lapointe Rosenstein Marchand Melançon, passed away in August 2010 at the age of 72. A pioneer in the world of international franchising, he was known for his generous spirit and his ability to foster consensus and collaboration in his work.

As a law student in the 1960s, Alex Konigsberg was managing editor of the McGill Law Journal and president of the Law Undergraduate Society. Mr Konigsberg maintained his ties with McGill, later lecturing at the Faculty of Law in corporate law, as well as at the Université de Montréal on international commercial transactions.