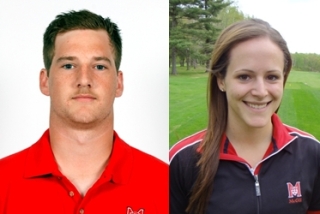 MONTREAL -- Jonathan Collin of Greenfield Park, Que., and Melissa Coré, of Beaconsfield, Que., are the McGill University athletes of the week for the period ending Sept. 13.

Collin, a 6-foot-5, 240-pound quarterback, was also named as offensive player of the week in the Quebec University Football League.  He rushed for two touchdowns and passed for another as McGill upset Sherbrooke 29-11 last Friday. The 20-year-old education major completed 21 of 34 passes for 177 yards, one TD and one interception. He also carried five times for 21 yards and directed an attack that generated 436 yards of net offence. Collin previously attended Champlain College in St. Lambert, Que.

Coré finished second of 26 women at a Quebec university tournament at the Milby Golf Club in Lennoxville over the weekend. A 23-year-old post-graduate student in management, she shot identical four-over par rounds of 77 each to finish three strokes off the pace. Prior to enrolling at McGill, Coré graduated from John Abbott College (2005) and UBC (2008).