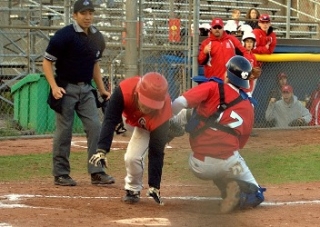 MONTREAL - Pinch-hitter Justin Cloutier of Kirkland, Que., hit a two-out double to knock in a pair of runs in extra innings as McGill rallied for a 7-5 victory over John Abbott College in men's university baseball action, Tuesday, at Parc des Benevoles in Kirkland, Que.

The win improved McGill's pennant-winning record to 13-1 in the Canadian Intercollegiate Baseball Association's Northern Conference, with only two games remaining before post-season play.

Trailing 3-1 in the third inning an 5-4 after five, the Redmen tied the game in the sixth inning and won it in dramatic fashion in the eighth to make a winner of pitcher Daniel Kost-Stephenson, who tossed three perfect innings in relief of starter Conrad Hall of Pierrefonds, Que., and his replacement, LJ Aguinaga of Dollard des Ormeaux, Que.

Veteran shortstop Alex Day, a native of Toronto, drew a walk to lead-off the magical eighth, followed by fly-ball outs to centre and left-field, respectively, by Casey Auerbach and Ted Davis. Sophomore Channing Arndt of Yarmouth, Maine drew a walk, as did and Brian Cook, a freshman from Barrington, R.I., to load the bases for right-fielder Alex Chouinard.

However, McGill field manager Ernie D'Alessandro called Chouinard back to the dugout and sent up Cloutier to pinch-hit. The 22-year-year-old management junior jumped on the first offering he saw, hammering the ball over the left-fielder's head to cash in the go-ahead and insurance runs.

In the bottom of the inning, Kost-Stephenson, a mechanical engineering freshman from Westmount, Que., continued his mastery of the Islanders and retired the side in order.

McGill (13-1) will close out their splendid campaign with a doubleheader against second-place Concordia (9-5) on Wednesday (Oct. 6) at Trudeau Park in Cote St. Luc, beginning at 7 p.m. The CIBA Northern Conference semifinal best-of-three semifinal series is slated to begin on Saturday (Oct. 9).