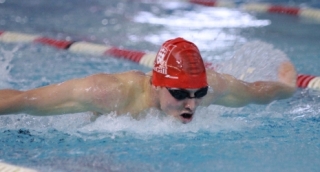 (Steven Bielby was named swimmer of the meet for the second straight Quebec Cup competition. Photo by Andrew Dobrowolskyj)

MONTREAL -- Steven Bielby of Pte. Claire, Que., and Marc-Andre Benoit, a freshman from Montreal, each garnered four gold medals as McGill swept both the men's and women's divisions of the second Quebec Cup swim meet of the season at the University's Memorial Pool, Saturday.

It marked the first time in eight years that McGill had swept both divisions of a major conference meet, dating back to men's and women's victories at a Quebec Cup meet held in Sherbrooke on November 22, 2003.

The two McGill squads combined to win 10 races, including five of six relays.

Bielby and Laval's Genevieve Cantin, who also finished first in four races, were named male and female swimmer of the meet, respectively.

"It was really cool to have two of our guys win four gold medals each," said Peter Carpenter, in his third season as head coach at McGill.  "Bielby was amazing again and leads by example. We earmarked the 200 IM, his first individual event, as the race he had to win to set the tone and he really nailed it. It was the best mid-season 200 IM of his life.

"And it was great to have a rookie (Benoit) win four gold medals. It was really an exciting day for the entire team."

McGill mopped up the men's competition with 170 points. Laval was a distant second with 111, followed by the Montreal Carabins (75), Sherbrooke (12) and UQTR (2).

On the women's side, the Martlets registered 127.5 to edge out second-place Laval by five points. The Carabins were third with 189, followed by Sherbrooke (20) and UQTR (6).

"Going into the meet, looking at the (athletes entered from other teams), I did not expect our women to be within 50 points of winning," said Carpenter. "They've worked really hard and the feeling was great all week leading up to the race and they even had a good vibe up on the blocks today. The focus was always on showing up to compete Saturday and they really came through. To have them band together like they did and win as many races as we did today was truly amazing."

"To have a rookie like Lopez swim under 30 seconds in the 50 backstroke is a really huge accomplishment," said Carpenter of the 5-foot-3 arts freshman from Calgary. "Since I've been coaching here, we haven't had anyone come close to going under that time."

"We didn't have many CIS qualifiers at the Quebec Cup meets last year and had to scramble at the end of the season (to qualify them in dual meets), so it was really nice to get them now and the pressure off their shoulders for the rest of the season."

The third of five Quebec Cup competitions is slated to be held in Sherbrooke on Nov. 12 but a prolonged strike of administrative staff there has left that race in doubt and a decision will be made in the coming week on whether the event be moved to the McGill pool.