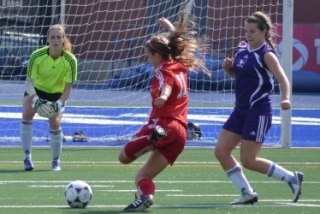 TORONTO -- Julia Bahen, a senior from Vancouver, B.C., converted a penalty shot in the 88th minute to give McGill a 2-1 victory over Western and the Old Four women's soccer tournament title in dramatic fashion at Varsity Centre on the U of T campus, Sunday.

Tied 1-1 with only minutes remaining, Ottawa native Laura Bland-Lasso was taken down in the 18-yard box, setting up Bahen's winning penalty shot.

Stephanie Avery of Tsawwassen, B.C., had opened the scoring for McGill, on a text-book play in the 40th minute but Western's Hayley Slavin notched the equalizer just three minutes later.

Goalkeeper Victoria Muccilli of Mississauga, Ont., collected the win between the pipes for the Martlets.

"It's been a good training camp for us so far, we are improving daily and it showed today," said McGill head coach Marc Mounicot. "Western defended well but could not match our technical level. We controlled the game for long periods of time. We were the better team, even if we had to wait 89 minutes to score the decisive goal."

The Martlets, who improved to 3-0-1 in exhibition play, have another non-conference affair on Tuesday when they host Collège Ahuntsic on Molson Stadium at 8 p.m. Later in the week, they leave for Fredericton, where they will play UNB (Aug. 31) and UPEI (Sept 2) at the UNB Fall Classic tournament.

Queen's earned the women's bronze with a 2-0 shutout over the host Blues. Jackie Tessier, the 2012 OUA East player of the year, opened the scoring in the 32nd minute and sophomore midfielder Cara Ott added an insurance goal in the 60th. Rookie goalkeeper Madison Tyrell earned the shutout.