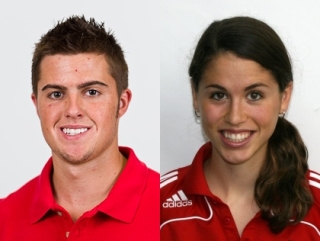 MONTREAL -- Austin Anderson of Canmore, Alta., and Sarah McCuaig of Waterloo, Ont., are the McGill University athletes of the week for the period ending Sept. 19, 2010.

Anderson, a place-kicker of the Redmen football team, accounted for 19 points and matched a single-game school record with six field-goals in McGill's 34-29 loss to Concordia last Friday. The five-foot-11, 180-pounder went 6-for-8, connecting on distances of 46, 27, 12, 48, 18 and 42 yards. Anderson, a  21-year-old finance junior, equalled the McGill single-game mark set by Glenn Miller in 1984 and was one short of the Quebec conference record for a non-overtime game. Anderson, the son of former NFL star kicker Gary Anderson, just missed making a 55-yarder and hit the upright on a 45-yard attempt. He joined McGill out of Canmore Collegiate high school in Alberta.

McCuaig, a 20-year-old science sophomore, was the top university runner and finished second overall at the McGill Open cross-country meet held on the slopes of Mt. Royal, Saturday.She completed the four-kilometre course in 14 minutes, 38 seconds, one second behind race winner Avril Ogrodnick of the McGill Olympic Club. McCuaig enrolled at McGill in 2009 out of Sir John A. Macdonald secondary school in Waterloo.