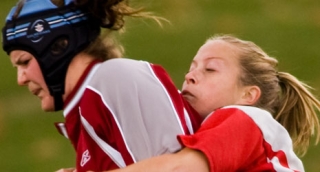 It extended the Martlets undefeated streak against the Gaiters to 19-0 since 1998, the first year that the sport was sanctioned by Canadian Interuniversity Sport.

Rounding out the scoring for the Martlets was sophomore Briana Yerbury of Dorval, Que., with a pair of tries, plus single tries from junior Laura Stewart of St. Adele, Que., and sophomore Mandy Mongeon of Ile. Bizard, Que.

Colleen Marcotte, a sophomore from Huntingdon added a pair of conversions.

Sue Magwood, a native of Lennoxville, scored the lone try for the Gaiters, who finished last with a 0-5-1 record. She snapped a four-game shutout streak that Bishop’s had been skunked by the Martlets, dating back to 2004. McGill has won 15 of the 19 confrontations via shutout.

It was the final game before playoffs for the Martlets, 4-2, who can clinch second place in the Quebec conference should Concordia (4-1-0) lose their final game at first-place Laval (5-0) on Saturday.

McGill will now host St. Francis Xavier (6-0), the top team in the Atlantic conference, on Sunday in the McEwen Cup contest. The annual exhibition match between the X-Women and Martlets was initiated in 2004 by McGill to honor and thank the McEwen family of Montreal who generously donated land for McGill Athletics playing fields.