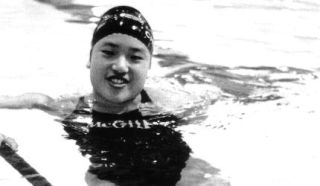 MONTREAL - Swimmer Carol Chiang is among five new additions announced recently for induction to the McGill Sports Hall of Fame.

Born Dec. 30, 1975 in The Pas, Man., Chiang studied at St. John's-Ravenscourt high school in Winnipeg before enrolling at McGill at the age of 17 in 1993. She graduated with a BSc in 1999 (physical and occupational therapy), followed by another BSc in 2000 (anatomy). She merited Academic All-Canadian honours in all five years that she competed.

A 5-foot-4, freestyle sprinter with the Martlets, she earned all-conference honours five times, collecting a combined total of 18 gold medals in five Quebec conference championship meets. At the CIAU Nationals, she qualified for All-Canadian status four times and won 11 medals, including three golds, five silvers and three bronzes. Chiang's first CIAU gold was in the 50m freestyle during her sophomore year. Her other gold medals occurred at the 1997 meet, as part of the 4x100 freestyle (4:15.83) and the 4x200 free (8:20.02), which established a CIAU record time.

In 1996, she finished fifth in the 50m free at the Canadian Olympic trials, missing the cut by one-tenth of a second.

Chiang, who won the team's rookie of the year award in 1993-94, served as team captain in 1996-97, was voted Team MVP three times and amassed enough FINA decathlon points to receive the team's swimmer-of-the-year award three times. She established a number of school records, since broken but still owns a piece of the 4x100m and 4x800m freestyle relay standards, which were established in 1997 (3:52.92 and 8:20.05, respectively).

A profile of each new inductee will be featured online every Wednesday at www.mcgill.ca/athletics

The induction luncheon, scheduled for Thursday, Oct. 11, 2012, kicks off the University's Homecoming Week celebrations. Tickets for the event are $65 and can be reserved by contacting the McGill Alumni Association at 514-398-8288.

Submissions for future inductions can be made by obtaining a nomination brochure from Kathryn Weaver at kathryn.weaver [at] mcgill.ca. A list of previous inductees can be found online at (www.mcgill.ca/athletics/varsitysports/athletes/hof/inductees/).