The Montreal Neurological Institute invites you to discover science at the movies!

The 2017 Neuro Film Series opens on February 8th (6:30 pm) with Columbia Picture’s “Concussion” (2015). Dr. Alain Ptito, director of the Department of Psychology of the MUHC, hosts the evening’s film presentation. His specialization on using brain imaging techniques for examining brain trauma amongst athletes will bring about an engaging and mind-opening discussion about the multi-award nominated film.   On January 27, Dr. Ptito and numerous colleagues and athletes will host Heads Up, a public lecture and scientific poster event to benefit concussion research (https://www.alumni.mcgill.ca/aoc/events-travel/EventDetails.php?id=MzA3Nzc).

About the film
“Concussion” starring Will Smith, Alec Baldwin, Gugu Mbatha-Raw and Albert Brooks, directed and written by Peter Landesman, is based on “Game Brain” by Jeanne Marie Laskas. The film is about forensic pathologist Dr. Bennet Omalu (Smith), who discovers neurological deterioration similar to Alzheimer’s disease while conducting an autopsy on a former NFL football player. As Omalu’s findings on the disorder get published, other athletes face the same diagnosis – and Dr. Omalu pursues to raise public awareness about the dangers of football-related head trauma.

Neuro Movie Nights are free, and the popcorn is too! 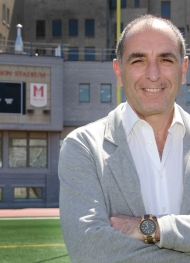 Dr. Alain Ptito is Professor of Neurology and Neurosurgery at McGill University. He has worked as a Neuropsychologist at the Montreal Neurological Institute and Hospital since 1983 and he is now Director of the Psychology Department at the MUHC and a medical scientist at the Research Institute of the MUHC. Dr. Ptito’s research program involves the investigation of the mechanisms involved in cerebral reorganization and plasticity in patient populations (hemispherectomy, callosotomy, Parkinson’s disease, stroke and head injury). Dr. Ptito is a member of the Order of Psychologists of the Province of Quebec and of the Société des Experts en Evaluation Médico-­‐légale du Québec. Dr. Ptito has served as Vice-­‐Président of the Chercheur-­‐Boursier Committee of the Fonds de la Recherche en Santé du Québec and he has been a member of several consensus panels on guidelines for traumatic brain injury. In recent years, Dr. Ptito has explored new methods of using fMRI for examining brain trauma. In athletes, he has been using fMRI to investigate the neural mechanisms underlying working memory. Thanks to support from CIHR, he has been able to carry out baseline fMRI and neuropsychological testing with hockey and football varsity athletes and to repeat the tests immediately after concussion and subsequently until symptom resolution. More recently, he has been investigating mild traumatic brain injury in motor vehicle accident victims and in children. With recent support from the CFI, his team will acquire an Ultra High Performance MRI system (housed at the Montreal General Hospital) that will be able to carry out more applications than any existing MRI system and will help observe the brain’s response to trauma with exceptional precision.
Attachments:
neuro_film_series_poster_february2017.pdf
Related Links:
Neuroevents Website
Heads UP on the Concussion Issue Public Lecture
Last updated: 06/12/2017 - 19:35
Back to top
McGill University
Copyright © 2022 McGill University
Accessibility Log in