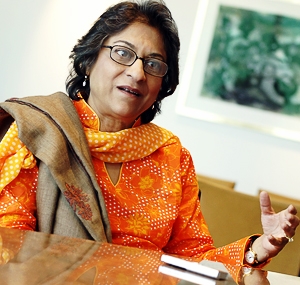 Born in 1952 in Lahore, Pakistan, lawyer Asma Jilani Jahangir is well known for her indefatigable defense of human rights and religious freedom in her country. Since 2004, she has taken her fight to a global level: she has been Special Rapporteur on freedom of religion or belief of the United Nations Commission on Human Rights since 2004. Ms. Jahangir founded Pakistan’s first female law firm in 1980 and has, at her own personal risk, fought human rights violations in the courts and in the media for almost 30 years.

Ms. Jahangir’s talk will be followed by a panel discussion on the challenges facing human rights activists, and will include the participation of The Hon. Irwin Cotler, M.P. and Bassem Eid, a past Litvack recipient and director of the Palestinian Human Rights Monitoring Group in East Jerusalem. A reception will follow.

The Award was created in 1987 to recognize the memory of Mr. Robert S. Litvack, a tireless defender of Aboriginal rights. It is awarded to "a person who has made a distinguished contribution to the defense of the rule of law and the protection of the individual against arbitrary power".