“mHealth applications to predict the need for hospitalization and in-hospital or post discharge mortality in under-five children: results from Bangladesh and Uganda” 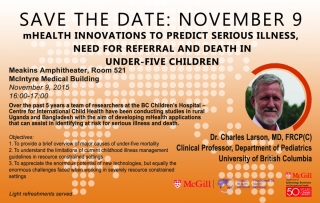 The McGill Global Health Programs and the McGill Department of Epidemiology, Biostatistics and Occupational Health are proud to present a seminar discussion with Dr. Charles Larson, MD, Clinical Professor in the Department of Pediatrics at the University of British Columbia.

Born and raised in Tacoma, Washington, Dr. Larson moved to Montreal to study medicine at McGill University.  He subsequently specialized in Pediatrics and Preventive Medicine & Public Health.  His global health career began in the late 1980s when he joined the McGill-Ethiopia Strengthening Community Health Project, which he directed from 1989 to 1992.   Since 2008, he has been a Professor of Pediatrics at the University of British Columbia and Director of the BC Children's Hospital-Centre for International Child Health (CICH). The CICH currently carries out capacity building and research projects in Bangladesh, China, Uganda, India and Senegal. Prior to joining UBC he lived in Dhaka, Bangladesh for 6 years where he directed the Health Systems and Infectious Diseases Division at the International Centre for Diarrheal Diseases Research, Bangladesh.  He also led a five-year McGill University population child health project in Chelyabinsk, Russia from 1998 to 2003.  Since 2011 he has been the PI on a Muskoka Initiative grant being carried out in rural Bangladesh, titled “Interrupting pathways to Maternal, Newborn and Early Childhood Sepsis". Dr. Larson’s interests currently focus on implementation studies, including research in support of the scale up of zinc treatment of childhood diarrhea and interventions that address the early detection, referral, treatment and follow-up management of sepsis in newborns and young children.   Charles is a past Board of Directors Chair of the Canadian Society for International Health and currently the National Coordinator of the Canadian Coalition for Global Health Research

Over the past 5 years a team of researchers at the BC Children’s Hospital – Centre for International Child Health have been conducting studies in rural Uganda and Bangladesh with the aim of developing mHealth applications that can assist in identifying at risk for serious illness and death.  The research team includes clinicians, epidemiologists, statisticians, engineers, and psychologists. To date these have been facility-based studies which have led to the development and testing of predictive models for 1) need for hospitalization, 2) death in hospital and 3) post hospital discharge mortality in children under five years of age.  Within the context of existing health systems, these findings have led to the current development and testing of post-discharge survival kits and field testing of smart phone applications that will accurately identify children in need of referral from villages or local health centres to hospital facilities.

Refreshments will be served