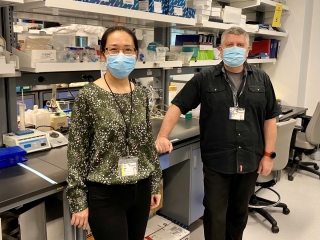 Montreal, June 2, 2021 –Breast cancer is the leading cause of cancer death in women around the world, responsible for 1,700 deaths every day. Although the vast majority of breast cancers are treatable, the most aggressive subtype – triple negative breast cancer (TNBC) – has a high recurrence rate, a high potential for metastasis and shows resistance to conventional treatments, leading to very poor prognosis and survival outcomes. A team of researchers at the Research Institute of the McGill University Health Centre (RI-MUHC) conducted a preclinical study and discovered a novel targeted combination therapy that efficiently reduced tumour growth in metastatic breast cancer. Published in Nature Communications, their findings could lead to the development of a novel first line targeted therapy for the treatment of TNBC, with the prospect of rapidly transitioning to clinical trials in humans.

“There is no targeted therapy for TNBC. Chemotherapy treatment can even enrich these tumours in cancer stem cells and be detrimental to the patient, as we have shown in a previous study,” says Dr. Jean-Jacques Lebrun, Senior Scientist in the Cancer Research Program at the RI-MUHC and principal investigator of the study. “Filling that huge medical gap was our motivation in conducting this study.”

While most breast cancers have one of three main receptors that are like entrance gates for treatments – estrogen, progesterone and a protein called human epidermal growth factor (HER2) – TNBC has none, thus the name triple negative breast cancer. Using state-of-the-art technologies such as gene editing and genome-wide molecular approaches, the team identified two pathways which could be targeted in a therapeutic strategy.

In the first part of the study, the team of researchers was able to identify about 150 genes that could either induce tumour formation (oncogenes) or prevent tumour formation (tumour suppressors). To achieve this, they screened the whole human genome – all 20,000 genes – in a preclinical mouse model of TNBC. Using the gene editing technique CRISPR/Cas9, they cut each of the genes individually and induced their loss of function – a process called gene knock out. Very few studies have used these forward genetic in vivo CRISPR screens at the genome-wide scale so far.

The team then showed that in TNBC an oncogenic pathway (MTOR) is activated whereas a tumour suppressor pathway (HIPPO) is inhibited, which could possibly explain why those tumours are so aggressive and deadly.

To establish the therapeutic relevance of their findings, the team took the investigation one step further.

“By disrupting the function of all genes, one by one, we found two major pathways that are involved in the regulation of the tumour development,” explains Dr. Meiou Dai, a Research Associate in the Lebrun Lab at the RI-MUHC and the first author of the study. “We thought, if we take an existing drug that can block the oncogenic pathway and add one that can promote the tumour suppressor pathway, we could have an effect in terms of blocking cancer formation.”

The researchers looked at existing drugs that could target these pathways and made experiments in vitro and in vivo. As a result, they found two efficient drugs: Torin1, a second generation drug known to block the MTOR pathway, and verteporfin, a drug normally used for a retina eye disease that can mimic the HIPPO pathway. They mixed the two drugs together and used mathematical models and a pharmacological approach to define whether the two drugs were acting independently or in synergy.

“What we found was beyond our expectations: the two drugs acted in a synergistic manner and efficiently reduced tumour growth in vitro as well as in vivo, using cell- and patient-derived xenograft models of TNBC,” says Dr. Lebrun, who is also a Professor at McGill Department of Medicine.

In the study, the researchers noticed that verteporfin induced cell death by apoptosis - a very classical cell death mechanism. Torin1, on the other hand, induced cell death through a non-apoptotic mechanism called macropinocytosis, an endocytic process also referred to as “cell drinking”, which allows all nutrients and fluids outside of the cell to be incorporated into the cell, eventually leading to implosion of the cell and catastrophic cell death.

“Macropinocytosis is a natural mechanism that cancer cells use for their own advantage, to grow bigger and faster,” explains Dr. Dai. “We realized that when we used the two drugs together, Torin1 utilizes this mechanism to favour the incorporation of verteporfin into the cell thereby increasing the later apoptotic cell death effects. It is this synergistic process that allows the two drugs to efficiently inhibit tumour formation.”

The results of this comprehensive study define a novel approach to efficiently prevent tumour formation and reduce the tumour burden, i.e. the size of a tumour, or the amount of cancer in the body, by simultaneously targeting pro-oncogenic and tumour suppressor pathways. The proposed targeted combination therapy for TNBC patients will help fill an important medical gap in the metastatic breast cancer field.

Finally, this study underscores the power and robustness of in vivo CRISPR genome wide screens in identifying clinically relevant and innovative therapeutic modalities in cancer.

The Research Institute of the McGill University Health Centre (RI-MUHC) is a world-renowned biomedical and healthcare research centre. The institute, which is affiliated with the Faculty of Medicine of McGill University, is the research arm of the McGill University Health Centre (MUHC)—an academic health centre located in Montreal, Canada, that has a mandate to focus on complex care within its community. The RI-MUHC supports over 450 researchers and around 1,200 research trainees devoted to a broad spectrum of fundamental, clinical and health outcomes research at the Glen and the Montreal General Hospital sites of the MUHC. Its research facilities offer a dynamic multidisciplinary environment that fosters collaboration and leverages discovery aimed at improving the health of individual patients across their lifespan. The RI-MUHC is supported in part by the Fonds de recherche du Québec — Santé (FRQS). rimuhc.ca