Stemming the tide of invasive species 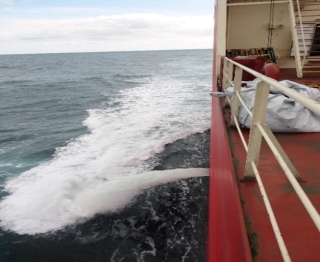 Ballast water release from ocean vessels has introduced hundreds of invasive species to coastal ecosystems worldwide, causing major disruptions to fisheries and biodiversity. Attempts to control aquatic invasions have met with mixed success in general. However, a new study suggests that a bi-national regulation targeting ships entering the Great Lakes since the mid-2000s has been remarkably effective in reducing a large proportion of the invasive species in the world’s largest freshwater ecosystem. The study by Anthony Ricciardi, (Professor of Biology in the Redpath Museum and Bieler School of Environment, McGill University) and co-author Hugh MacIsaac (Professor and Canada Research Chair in the Great Lakes Institute for Environmental Research, University of Windsor) was recently published in Conservation Letters.

“I'm aware of no other documented case in which the invasion rate of a large aquatic system has been suppressed through a management intervention,”said Ricciardi. “This layer of protection is clearly beneficial. There are many highly invasive freshwater species in Europe, for example, that could be delivered in ballast water and would almost certainly proliferate in the Great Lakes. The regulation is likely preventing their introduction.”

The world’s most invaded freshwater ecosystem

No other freshwater ecosystem on Earth has been invaded as much, or as frequently, as the Great Lakes basin. Nearly 190 non-native species of fish, invertebrates, plants, plankton, and microbes have established populations in the basin over past two centuries. Nearly 65% of invaders recorded since the opening of the St Lawrence seaway in 1959 were transported to the Great Lakes in the ballast tanks of ships from overseas ports. These include notorious stowaways such as the zebra mussel, the quagga mussel, the spiny water flea, and the round goby – each among the most ecologically and economically damaging invaders in the basin.

Between 1959 and the mid-2000s, one new invader was discovered established in the Great Lakes every 6-7 months.

This onslaught prompted a move by Canada and the USA to harmonize regulations and mandate flushing saltwater through ballast tanks of all ships while they were still in open ocean, before entering the St Lawrence seaway bound for the Great Lakes. Saltwater flushing has been shown in experiments to cause a massive reduction in the abundance and variety of freshwater organisms carried in ballast tanks.

Empirical evidence of an abrupt reduction in invasion risk

The true test of such a regulation is its effect on the observed rate of species invasion. Since 2008, invasions reported in the Great Lakes basin have declined by 85% and are now at their lowest rate in two centuries. Other factors could have contributed to the abrupt decline in the invasion rate, but empirical evidence points to ballast water regulation as the overwhelming primary cause.