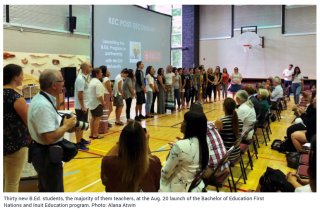 It’s a labour of love between McGill’s Office of First Nations and Inuit Education (OFNIE) in the Faculty of Education, and the Kahnawà:ke Education Centre (KEC). It’s also in line with McGill’s Task Force on Indigenous Studies and Indigenous Education.

The Mohawk reserve of Kahnawà:ke is located 10 kilometres southwest of Montreal, on the south shore of Lake Saint-Louis, and counts approximately 8,000 residents.

Approximately 30 Mohawk students are already registered in the new program.

The Kahnawà:ke in-community B. Ed. FNIE program is modelled on the successful B. Ed. FNI program, now in its third year, in the Mi’gmaq community of Listuguj, in the Gaspésie region of eastern Quebec.

Classes start early September and will be held at partnering schools in Kahnawà:ke.

“As Post-Secondary Distance Counsellor, and the liaison with McGill’s Office of First Nations and Inuit Education, I am looking forward to continuing to work with OFNIE to offer the first-ever in-community Bachelor of Education degree in Kahnawà:ke” said Bethany Kawennishon Douglas, KEC Post-Secondary Distance Counselor. “Not only will this program respond to the KEC’s needs in terms of capacity building by allowing our teachers to become certified, it will also respond to the community’s needs as well, by giving community members the opportunity to pursue Post-Secondary education in a community-centered, culturally relevant and respectful way.”

In addition to a variety of professional development programs OFNIE already runs four teacher certification programs delivered across 24 different communities, and plays an active role in reconciliation and relationship building between McGill and Indigenous communities.

The new B. Ed. FNIE will provide qualifications on-par with any mainstream B.Ed. graduate.

In the post Truth and Reconciliation era there is a new understanding that in-community degrees should be equivalent to on-campus degrees. Indigenous communities want the same level of professionalization from their teachers as is expected of any teacher in Quebec, in addition to the ability to pass on Indigenous culture and language to their children.

Non-Indigenous students can benefit from the opportunity of having Indigenous teachers in their schools, too.

“Through these kinds of initiatives McGill and its partners can play a substantive role in achieving a true vision of reconciliation and reciprocity,” says Stephen Peters, Assistant Director of OFNIE. “At OFNIE we truly believe that investing in in-community Indigenous education is the most self-evident and demonstrable way Canadian society can move beyond the residential school era.”

Typically, Indigenous students are mature students, between the ages of 20 and 45 and have jobs and families. In university classes they encounter a system of learning and demonstrating knowledge that can be discordant with local practices of teaching and learning.

The stigma and distrust from the residential school era has produced scepticism of formal education. OFNIE’s mandate is to remove these barriers.

This story has been covered by a variety of news sources including: