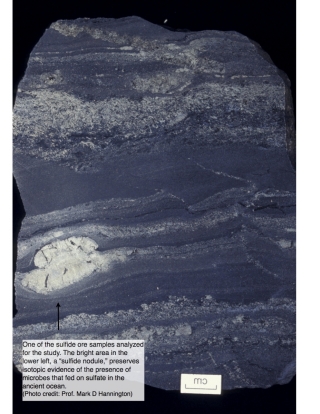 An analysis of sulfide ore deposits from one of the world’s richest base-metal mines confirms that oxygen levels were extremely low on Earth 2.7 billion years ago, but also shows that microbes were actively feeding on sulfate in the ocean and influencing seawater chemistry during that geological time period.

The research, reported by a team of Canadian and U.S. scientists in Nature Geoscience, provides new insight into how ancient metal-ore deposits can be used to better understand the chemistry of the ancient oceans – and the early evolution of life.

Sulfate is the second most abundant dissolved ion in the oceans today. It comes from the “rusting” of rocks by atmospheric oxygen, which creates sulfate through chemical reactions with pyrite, the iron sulfide material known as “fool’s gold.”

The researchers, led by PhD student John Jamieson of the University of Ottawa and Prof. Boswell Wing of McGill, measured the “weight” of sulfur in samples of massive sulfide ore from the Kidd Creek copper-zinc mine in Timmins, Ontario, using a highly sensitive instrument known as a mass spectrometer. The weight is determined by the different amounts of isotopes of sulfur in a sample, and the abundance of different isotopes indicates how much seawater sulfate was incorporated into the massive sulfide ore that formed at the bottom of ancient oceans. That ancient ore is now found on the Earth’s surface, and is particularly common in the Canadian shield.

The scientists found that much less sulfate was incorporated into the 2.7 billion-year-old ore at Kidd Creek than is incorporated into similar ore forming at the bottom of oceans today. From these measurements, the researchers were able to model how much sulfate must have been present in the ancient seawater. Their conclusion: sulfate levels were about 350 times lower than in today’s ocean. Though they were extremely low, sulfate levels in the ancient ocean still supported an active global population of microbes that use sulfate to gain energy from organic carbon.

“The sulfide ore deposits that we looked at are widespread on Earth, with Canada and Quebec holding the majority of them,” says Wing, an associate professor in McGill’s Department of Earth and Planetary Science. “We now have a tool for probing when and where these microbes actually came into global prominence.”

“Deep within a copper-zinc mine in northern Ontario that was once a volcanically active ancient seafloor may not be the most intuitive place one would think to look for clues into the conditions in which the earliest microbes thrived over 2.7 billion years ago,” Jamieson adds.  “However, our increasing understanding of these ancient environments and our abilities to analyze samples to a very high precision has opened the door to further our understanding of the conditions under which life evolved.”

The Natural Sciences and Engineering Research Council of Canada made this study possible through fellowships to Jamieson and a Discovery grant to Wing.