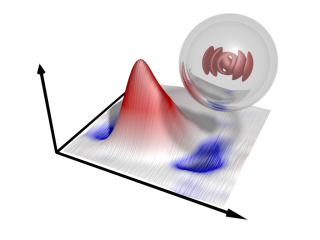 In a step forward for the field of quantum mechanics, McGill University researchers have achieved a breakthrough in sensitive measurements of the wave-like properties of electrons.

In a paper published in June 2020 in the Proceedings of the National Academy of Sciences, the research team led by Patanjali Kambhampati, an associate professor of chemistry at McGill, investigated a phenomenon known as electronic coherence – the propensity of electrons to behave like waves capable of interfering with one another.

Outside the rarefied world of supercooled semiconductors and the emerging field of quantum computing, electronic coherence has been almost impossible to observe – until now.

“It’s incredibly hard to see these effects,” Kambhampati says. “We built a microscope to see them in a real system at room temperature before they washed away. It’s the most delicate of dances that you would otherwise never see.”

The “microscope” the researchers used to observe this fleeting phenomenon was a multi-dimensional electronic spectrometer (MDES). Hand-built at McGill, this unique instrument can measure the behaviour of electrons over extraordinarily short periods of time – as brief as 10 femtoseconds, or 10 millionths of a billionth of a second.

Over the past decade, scientists have pursued a tantalizing theory that quantum coherence might play a central role in photosynthesis. Many hoped that if nature made use of coherence to capture the sun’s energy, sufficient research effort would eventually reveal how this trick could be used to create ultra-efficient rooftop solar cells.

But, many years of lab work and millions of dollars of research funds later, the idea of a quantum mechanical explanation for photosynthesis has largely fallen out of favour, and the prospect of practical applications for quantum mechanical systems operating under ambient conditions remains elusive.

A fingerprint of disorder

Kambhampati and his team have come at electronic coherence from a different angle – one driven by a basic scientific desire to “see nature in all its glory”. From their perspective, coherence serves as a means to investigate the disordered state of electrons.

“Electronic disorder is of central importance to the properties of materials, with implications for material synthesis and device fabrication in fields ranging from photovoltaics to quantum information processing,” Kambhampati says.

“Coherence is useful as a fingerprint of disorder. Thanks to this work, we can now see if we have a disordered material because we are actually looking at how this wave-like interference between electrons occurs – perfectly or imperfectly – and we can quantify how imperfect it is.”

“Atomic fluctuations in electronic materials revealed by dephasing” by Samuel Palato et al. was published in Proceedings of the National Academy of Sciences of the United States of America.