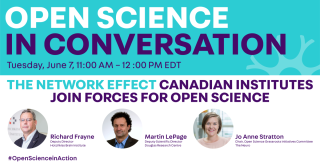 With the support of the Tanenbaum Open Science Institute, The Neuro, the Douglas Research Centre, and The Hotchkiss Brain Institute are the first in Canada to commit to Open Science institute-wide. While an increasing number of researchers and research groups around the world are openly sharing their research, it is rare for an institute to make the commitment.

These new partners are growing the Canadian Open Science movement and aim to accelerate our understanding of and ability to treat neurological diseases and mental health disorders.

About the OPEN SCIENCE IN CONVERSATION Series

Open Science has the power to transform research and care, accelerate the discovery of new treatments and cures and ultimately change lives. At The Neuro, we are committed to openly sharing data, resources and expertise in order to bring an end to the suffering caused by neurological disorders. In this webinar series, hosted by The Neuro’s Tanenbaum Open Science Institute, learn how The Neuro and communities around the globe are putting Open Science in action to benefit patients and society.

Become part of the Open Science revolution. Join Us!