Exhibition | Fantastic beasts and where to find them at McGill: An 18th century paper museum 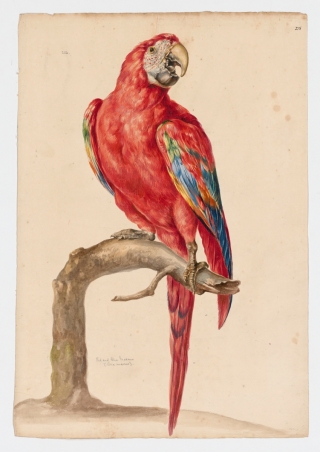 Parrots and humming birds, hawks and falcons, lions, tigers, wolves, snakes and turtles, all are pictured in glorious colour by the artists who created Taylor White’s ‘paper museum’. For almost forty years, from the mid-1730s until his death in 1772, the British jurist and member of the Royal Society, commissioned almost 1,000 paintings of birds and beasts from the best animal painters of his day.

White’s artists depicted the birds and animals brought back to London from the four corners of the world by sailors and merchants, and they travelled to private estates, game parks, the Tower of London and the British Museum to portray the fantastic beasts collected by the curious and the wealthy. The artists painted ‘size of life’ and in true colours, enabling us to identify their sitters with great accuracy, and revealing portraits of some species now extinct, like the Guadeloupe macaw and the Eskimo curlew.

White’s fantastic beasts were unpublished in his lifetime, and have rarely been displayed since they were acquired for McGill in 1926. His amazing collection is now the focus of a major research project, and highlights from White’s ‘paper museum’ can be seen in their furred and feathered splendour in this special exhibition. In addition, display cases curated by members of the research team will explore White’s scientific network, the specimens he collected, the lives of the artists he employed, and the relationship between natural history and the slave trade, along with an examination of the fascinating notes White included with each painting.

This project is funded by the Social Sciences and Humanities Research Council of Canada's Insights Development Grant Program.