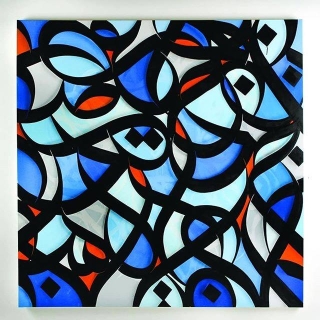 Arabic calligraphy is one of the most recognizable forms of Islamic Art. While originally used to preserve the Word of God (Qur’an), Arabic calligraphy also appeared in other written texts (philosophy, literature and poetry). It further developed to represent figural depictions and decorations that were uncommon in Islamic Art.

Distinct scripts and styles like Kufic, Naskh, Raqaa, Diwani, Thuluth or Nastaliq flourished across the Muslim world often unified by specific common principles. Major elements of the Arabic script such as fluid lines and ornamentation offer contemporary calligraphers the flexibility to create a free-form twist on classic techniques, repositioning calligraphy for today’s context.

This exhibition brings together a new wave of calligraphy artists from various corners of the world united by the art of writing and the desire to break through barriers, tell a story and reach other cultures.

Beyond words: dancing letters in Islamic calligraphy will be on display in the Islamic Studies Library from February 8 to August 31, 2020. Freely accessible during opening hours (9-5 weekdays, 10-6 Saturday).