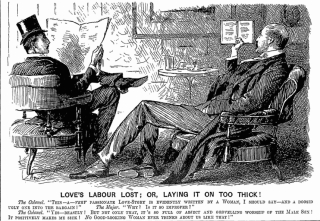 Explore a Victorian-era newspaper phenomenon called “The Agony Columns.” Characterized by anonymity, lack of censorship, and encryption, the “agonies” rapidly became some of the most widely-read texts in Victorian England. Encoded messages were often featured in the columns, written and enjoyed by forlorn lovers, cunning criminals, savvy detectives, and newspaper readers who reveled in the dramas unfolding on the newspapers’ front pages. This exhibition seeks to recount some of the encrypted stories of the Times, understand their influence on Victorian society, and explore their lasting fascination.

By 1855, newspapers had become exponentially more available and affordable to Victorian Britons with the repeal of the stamp tax and newspaper duty. In an increasingly saturated marketplace, newspapers began to vie with another popular form of print media for readers’ attention: the novel. From then forward, newspapers and novels entered a sustained a dialogue that would have wide-ranging effects on their mutual development. While authors began to incorporate aspects of newspaper culture into their novels, newspapers capitalized on the themes and narratives of sensation fiction to bolster readerly interest.

In the exhibition cases, you will encounter different stories shared by Victorian newspapers and sensation novels over the course of their mutual development. On the touch table, you can try your own hand at becoming a Victorian consulting detective to decipher a mystery hidden in plain sight in that most popular column of the newspaper: the Agony Column.

The ‘narrative turn’ of nineteenth-century newspapers toward the sensational is nowhere more apparent than in the widely popular ‘Agony Column’ of The Times, which published anonymous submissions from correspondents across the British Empire. Cryptic in nature and occasionally veiled in code, by the mid-1850s the Agony Column had grown into a bona fide sensation. Serial readers of agonies were captivated by the often mysterious and sometimes sordid stories unfolding in extended exchanges, returning day after day as narratives slowly emerged.

The exhibition is accessible during the opening hours of the McLennan Library Building. See details here: https://www.mcgill.ca/library/services/hours

Ciphers of The Times is a SSHRC-funded research project that investigates the Agony Columns of Victorian newspapers and their influence on Victorian society and literature. Using an interdisciplinary methodology of computational analysis and close reading we seek to interrogate and expand existing understandings of how the newspaper featured in Victorian novels.

The team is led by Nathalie Cooke and supported by the Social Sciences and Humanities Research Council of Canada and the McGill Library. Explore the Project website: https://libraryponders.github.io/about.html