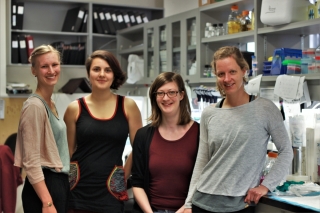 When thinking of scientific research, it is easy to picture the rapid advancements made towards advancing global knowledge in domains ranging from climate science to treating cancer.

However, the benefits of scientific research are often accompanied by high environmental costs and heavy reliance on single-use plastics, hazardous chemicals and large equipment. Through the Green Labs Initiative at the Montreal Neurological Institute and Hospital (The Neuro), a team of post-graduate students and academic staff are striving for a transition to environmentally friendly labs at McGill.

“We were becoming frustrated by the amount of waste we produced during our experiments, as well as the ridiculous amount of non-recyclable packaging we receive many of our products in,” Roberts said. “We decided that we needed to make the change ourselves, and so started the initiative to address these issues.”

Since receiving funding from the Sustainability Projects Fund in December 2018, the Green Labs team has implemented a number of programs, such as a tip-box recycling program for plastic pipette tips. The Green Labs Initiative has also established an agreement with Kimberly-Clark to send back used rubber gloves for recycling. Approximately 210 litres of plastic waste have been diverted through the pipette tip recycling program, while six labs have signed up for the glove recycling program, which will soon be shipping back their first round of boxes.

The initiative has also created greater impacts within the lab community at The Neuro. The team has collaborated with the Café Vienne in The Neuro to encourage customers to bring reusable dishware. On a broader scale, the team has held community-building events such as a Lab Swap where researchers were able to exchange extra, unused lab consumables, such as tubes and pipette tips, which would have otherwise gone to waste.

The Green Labs Initiative is made possible by the help of Green Lab Ambassadors, or GLAMbassadors. The Ambassadors, currently a group of student researchers from 11 different labs, volunteer to monitor the progress of the various green initiatives throughout The Neuro. These students gather various recyclable plastics throughout the institute, search for new ways to practice sustainability in their labs, and communicate on behalf of the project as a whole.

“We have been overwhelmed by the enthusiasm shown by members of the community towards our program,” said Roberts. “It has been important to us to create a community around this project, including involving other stakeholders within the building and around McGill, in order to guarantee the success of our initiative.”

The Green Labs Initiative team hopes to kick start a greater conversation about lab sustainability on McGill campus and encourage other labs around campus to empower both students and staff involved in research to implement sustainable practices throughout their research careers.

“We hope that (the Green Labs Initiative at The Neuro) can be a template to other student groups that want to make a change to the environmental impact of their research,” said Roberts.

“Ideally in the future there will be a McGill-wide framework for labs to reduce their environmental impact, that will be compulsory for labs and departments to take part in,” she continued. “We are just at the beginning, but this is the wider vision.”

Learn more about the Green Labs Initiative at The Neuro by visiting their Sustainability Projects Fund project page. For researchers striving to reduce their environmental impact, check out McGill’s Sustainable Labs Guide.