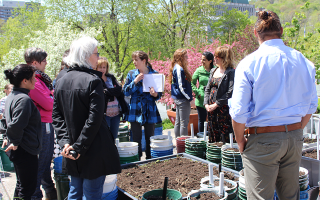 McGill’s has won the Association for the Advancement of Sustainability in Higher Education’s (AASHE) Campus Sustainability Achievement Award for its sustainability engagement programs, together referred to as the Ladder of Engagement.

“McGill staff frequently go above and beyond to do what’s best for our community and for our planet,” said Vice-Principal Administration and Finance Yves Beauchamp. “We’re proud to see our staff’s sustainability efforts recognized at such a high level.”

“The higher education sustainability community continues to make major contributions toward a thriving, equitable and ecologically healthy world,” said AASHE’s Executive Director Meghan Fay Zahniser. “I am excited to recognize the innovation and leadership demonstrated by this year’s finalists.”

Moving beyond the usual suspects, towards collective action

Developed between 2016 and 2019, the programs work to increase collective actions by moving students, staff, and faculty from individual sustainability actions, like tending a garden, to organizing and envisioning large-scale systemic change, such as developing their own sustainability strategies. The programs also focus on moving beyond community members already interested and engaged with sustainability on campus, attracting those who might not have otherwise participated.

In those three years, about 1,000 McGill community members, including about 600 staff, have engaged with one or more of the sustainability programs, many of them navigating up the Ladder.

“What really inspires me about the Ladder [of Engagement] is that we see people both working their way up towards the Action Plans, but you just as frequently see people get involved with ULAPs and then get involved with our other programs,” said Amelia Peres, McGill’s Sustainability Strategy administrator.

For example, about 25 per cent of certified workplaces first became familiar with the Office of Sustainability and its programs through the Staff Gardens, in which staff members tend to their own on-campus garden plots through the summer.

The goal the Ladder of Engagement, Sustainability Officer Shona Watt explained, is to also strengthen participants’ understanding of the nuanced elements of social and environmental sustainability, such as diversity and accessibility, while also increasing a sense of community among staff.

“It was important to us that social sustainability was not ignored in the design our engagement programs,” said Watt. “By consulting various stakeholders on campus, we were sure that inclusivity, accessibility, diversity, and social cohesion played a role in the Ladder of Engagement.”

She continued that by ensuring that social sustainability was just as much a focus as environmental efforts, McGill’s programs were able to attract a wider audience through speaking to a variety of interests.