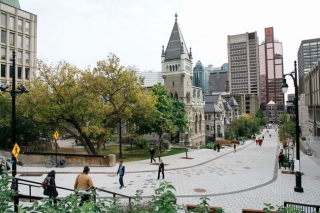 McGill is the second greenest campus in Canada according to the 2017 Corporate Knights Green Campus Ranking.

Campuses were evaluated on initiatives they have undertaken to improve their environmental impact, including green buildings, greenhouse gas emissions, sustainable transportation, purchasing, and waste management.

“We are lucky to have a talented and engaged community that has pushed for environmental programs at McGill for decades,” says VP Administration and Finance Yves Beauchamp. “It is an honour to be recognized for the progress we have made thus far and we feel encouraged to further strengthen our sustainability performance for years to come.”

Following the signing of two major international Declarations on University’s commitment to sustainability in the early 1990s, McGill’s passed its first Environmental Policy in 2001, marking a turning point in institutional commitment to environmental responsibility and environmental literacy.

“Our greatest sustainability accomplishments to date, from greenhouse gas emissions reductions to an increased focus on climate and sustainability in our educational programs, have resulted from the collaboration of our students, faculty, and staff at McGill,” noted Sustainability Director Francois Miller.

The announcement of McGill’s green campus ranking comes just as the University is finishing its Climate & Sustainability Action Plan, a continuation of the Vision 2020 Sustainability Strategy, which will be released later this semester.