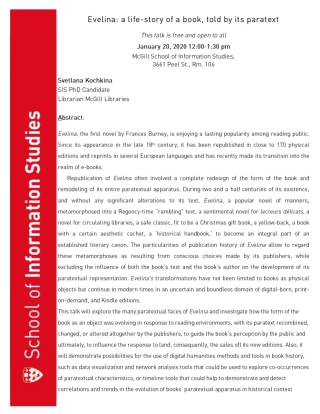 Evelina: a life-story of a book, told by its paratext

Evelina, the first novel by Frances Burney, is enjoying a lasting popularity among reading public. Since its appearance in the late 18th century, it has been republished in close to 170 physical editions and reprints in several European languages and has recently made its transition into the realm of e-books.

Republication of Evelina often involved a complete redesign of the form of the book and remodeling of its entire paratextual apparatus. During two and a half centuries of its existence, and without any significant alterations to its text, Evelina, a popular novel of manners, metamorphosed into a Regency-time “rambling” text, a sentimental novel for lecteurs délicats, a novel for circulating libraries, a safe classic, fit to be a Christmas gift book, a yellow-back, a book with a certain aesthetic cachet, a ‘historical handbook,’ to become an integral part of an established literary canon. The particularities of publication history of Evelina allow to regard these metamorphoses as resulting from conscious choices made by its publishers, while excluding the influence of both the book’s text and the book’s author on the development of its paratextual representation. Evelina’s transformations have not been limited to books as physical objects but continue in modern times in an uncertain and boundless domain of digital-born, print-on-demand, and Kindle editions.

This talk will explore the many paratextual faces of Evelina and investigate how the form of the book as an object was evolving in response to reading environments, with its paratext recombined, changed, or altered altogether by the publishers, to guide the book’s perception by the public and ultimately, to influence the response to (and, consequently, the sales of) its new editions. Also, it will demonstrate possibilities for the use of digital humanities methods and tools in book history, such as data visualisation and network analysis tools that could be used to explore co-occurrences of paratextual characteristics, or timeline tools that could help to demonstrate and detect correlations and trends in the evolution of books’ paratextual apparatus in historical context.