Sign up for the McGill Science newsletter
McGill 200: Join the celebration!
Home 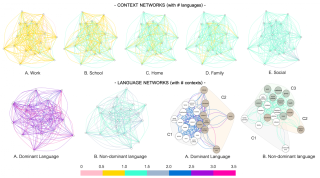 Psychology researchers at McGill University have used network science – a mathematical technique for revealing connections and patterns – to gain novel insights into Montrealers’ experience of using French and English.

The unique approach has brought to light subtle differences as to which social settings Montreal bilinguals discuss certain topics and whether they use French, English or both languages to discuss those topics.

The study, published in the November edition of the Journal of Neurolinguistics, follows a trend in language science to pay closer attention to the context in which language is used, but the researchers have gone a step further with their analysis of the topics bilinguals talk about.

“In the cognitive sciences, when people study language, they’re almost always looking at how people use language, at what’s going on cognitively or in the brain,” explains the study’s senior author, Debra Titone, psychology professor at McGill and Canada Research Chair in Language and Multilingualism. “But what’s unique about this work is that we’re using mathematical tools to get at what people talk about.”

Bridging a gap between scientific and social understanding of language

Analyzing content in this way has traditionally been the province of the humanities – discourse analysis, for instance, is a tool familiar to linguistics, cultural studies and many other social science disciplines. The unique application of network science to study what people talk about in different contexts opens a path to incorporate information about context and content into future work on the neurological and cognitive processes underlying language.

“We know that experience matters in terms of how the brain gets tuned to particular cognitive functions like language or attention,” Titone says. “By bridging between the content and context of where people actually communicate in the real world and the processes that come to bear, we are providing a path for other researchers to get at the content of what people talk about in a quantitative way that could be combined with traditional processing measures.”

The researchers surveyed 115 French-English bilinguals, 66 of whom identified French as their stronger, or ‘dominant’, language, while the other 49 identified English as their dominant language. The participants were asked which of the two languages they used to talk about 21 different topics – ranging from sport to politics to religion – in each of five communicative contexts: at work, at home, at school, with their family, and in their social life. The findings revealed unique patterns for each of the five settings.

“On one end of the spectrum, we found the work context is more compartmentalized in terms of the number of things people are talking about and the number of languages they’re using to talk about those topics,” says lead author, Mehrgol Tiv, a doctoral candidate in experimental psychology at McGill. “At the other end, in their social lives, we found people were talking about all 21 of the topics, and they’re using both languages to talk about those topics.”

“That could be a characteristic of Montreal, where you have these highly proficient bilinguals in a city that is itself pretty bilingual,” Tiv says. “In other cities where they might not be so much language diversity, it could be harder to find a non-dominant language appearing in, let’s say, a social context.”

Future work to highlight individual differences in language use

The researchers acknowledge the results of the study were heavily influenced by the profile of the study participants – predominantly university students from in and around the McGill community. But, with collaborators in Montreal, Ottawa and Florida, they are already working on projects to apply their network science method across a broader range of demographics and languages.

“The broader theme we are really interested in pursuing is to better socially contextualize language and understand the role of individual differences,” Tiv says. “We see this this level of detail as something to leverage as opposed to casting it off as something that’s not meaningful, which has traditionally been done in the field.”

“Using network science to map what Montréal bilinguals talk about across languages and communicative contexts” by Mehrgol Tiv et al. was published in the Journal of Neurolinguistics.

Image: The researchers used network science – a system of ‘nodes’ and ‘edges’ – to reveal unique patterns in the topics Montreal bilinguals discuss in various settings, and they language they use to do so.