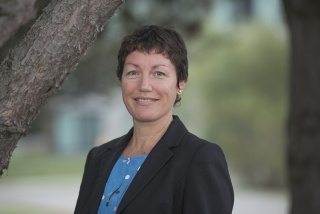 With Daryl Haggard, Associate Professor of Physics in the McGill Space Institute

Dr. Haggard's McGill Extreme Gravity and Accretion group investigates the most extreme endpoints for matter in the Universe, black holes and neutron stars, employing cutting-edge observational tests of Einstein's theory of general relativity and of plasma and accretion physics and pushing these black hole frontiers. Dr. Haggard will offer a brief, fun overview of her group's black hole studies and describe what future black hole studies may look like.

Daryl Haggard is an Associate Professor of Physics at McGill University and the McGill Space Institute. Her research focuses on black holes and neutron stars and leads multi-wavelength and time-domain studies regarding supermassive black holes and their expansion. In 2019, through the Event Horizon Telescope collaboration her team was able to report an image of a black hole’s shadow in 2019; she was honoured by La Presse for this discovery as Personalité de la semaine. Professor Haggard also co-led the identification of the first X-Ray counterpart of the first neutron star merger of GW170817; this earned her team a Top 10 Discovery of 2018 award by Québec Science and was Science Magazine’s 2017 Breakthrough of the Year. She has been honoured in her contributions to science with a CIFAR Azrieli Global Scholars Award in the Gravity and the Extreme Universe Program as well as a Tier 2 Canada Research Chair in Multi-Messenger Astrophysics. In 2020, her Event Horizon Telescope team received the 2020 Breakthrough Prize in Fundamental Physics.