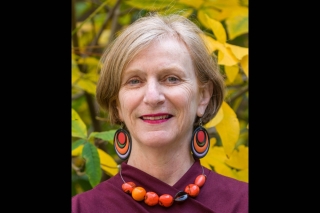 On September 14, the Royal Society of Canada (RSC) announced fifteen Canadian scientists, scholars, and researchers who have been honoured with RSC awards and medals for their outstanding achievements in their fields. Professor Catherine Potvin is the 2021 recipient of the RSC’s prestigious Sir John William Dawson Medal for her significant interdisciplinary research in conservation biology, social-ecology, policy, and the arts. She will formally receive her medal at the RSC's 2021 Celebration of Excellence and Engagement, presented by McGill on November 19.

"An amazing part of winning the Sir John William Dawson Medal is that Pierre Dansereau, one of Québec's best botanists and ecologists, was also honoured with this medal in 1995," said Potvin. "It is great to see interdisciplinarity appreciated by the Royal Society of Canada."

Potvin is a Professor in the Department of Biology at the Faculty of Science, a Tier 1 Canada Research Chair in Climate Change Mitigation and Tropical Forest, a Trottier Fellow from the Trottier Institute for Science and Public Policy, and a Fellow of the RSC. She is an expert in tropical rainforest conservation and climate change whose work has focused on forest ecosystems and tropical forest carbon stocks—the amount of carbon that has been sequestered from the atmosphere and stored within the forest ecosystem—with particular attention to the land-use decision-making processes of Indigenous groups.

“I want to express my sincere congratulations to Professor Potvin for this remarkable and well-deserved recognition of her interdisciplinary research to mitigate climate change” said Martha Crago, Vice-Principal, Research and Innovation. “Now more than ever before, the world needs scientists such as Professor Potvin to work with Indigenous groups and bring climate action to the forefront of policy making.”

The Sir John William Dawson Medal was established in 1985 by the RSC to honour the man who was its first President (1882-1883) and who was the foremost Canadian scientist and educator of his day: geologist, naturalist, teacher, author, man of religion, educational administrator and promoter of learning. The medal was endowed by McGill Graduates Society (founded by Sir William in 1857), the Henry Birks Foundation and the RSC itself, with contributions from Fellows, and staff and friends from McGill, to commemorate his term as Principal and to honour “the man who built McGill”.

To commemorate Dawson’s great versatility, the award is made for important and sustained contributions in two domains of interest to the RSC or in interdisciplinary research. The silver medal is awarded every two years if there is a suitable candidate.