Register to attend the event

McGill University and the Friends of CIHR are delighted to welcome renowned scientist, Dr. Lorne Tyrrell, to deliver a keynote talk on "Canadian Contributions to Pandemic Vaccines and Therapeutics”.

On Thursday September 8, 2022, at 4 p.m., Dr. Lorne Tyrrell, the 2021 Henry G. Friesen International Prize Winner in Health Research, will deliver a public lecture at the McGill Faculty Club. A visionary clinician-scientist, creative virologist, entrepreneur, and academic leader, Dr. Tyrrell will explore how Canadian scientists through both the Medical Research Council (MRC) of Canada and now the Canadian Institutes of Health Research (CIHR) have made many contributions to vaccine technology that helped enable the rapid response with new vaccines for SARSCoV2 – and discuss the importance of discovery science.

Dr. David Lorne J. Tyrrell, OC, AOE, MD, PhD, FRCP, FRSC, FCAHS, is a Distinguished Professor at the University of Alberta with major interests in the prevention and treatment of viral diseases. He led the Faculty of Medicine and Dentistry from 1994 to 2004 as Dean. In this capacity, Health Sciences at U Alberta flourished with major capital developments, including the Katz Group – Rexall Centre for Pharmacy and Health Research and the Li Ka Shing Centre for Health Research Innovation. During this period, Dr. Tyrrell assumed national responsibilities and chaired the Association of Canadian Medical Colleges, through which he facilitated the transition of the MRC to the CIHR. Dr. Tyrrell’s most celebrated lifesaving accomplishment in collaboration with Morris Robbins was the licensing of the first oral anti-viral drug for chronic HPV (Lamivudine) in 200 countries. This led to the establishment of the Li Ka Shing Institute of Virology in 2010 at the University of Alberta, where Dr. Tyrrell is its Founder and Director. He maintains active research programs in viral-host interactions, development of a HCV vaccine and an active program on SARS-CoV-2 vaccines, diagnostics, and antivirals.

Dr. Tyrrell has received numerous awards including the Prix Galien Canada Research Award (1998), Gold Medal of the Canadian Liver Foundation (2000), Alberta Order of Excellence (2000), Officer of the Order of Canada (2002), Frederic Newton Gisborne Starr Award of the Canadian Medical Association (2004), Fellow of the Royal Society of Canada (2004), Canadian Medical Hall of Fame (2011), Killam Prize for Health Science (2015), and the FCIHR Award of Honour (2018). He is the recipient of the 2021 Henry G. Friesen International Prize in Health Research.

The Henry G. Friesen International Prize in Health Research, established in 2005 by the Friends of Canadian Institutes of Health Research (FCIHR), recognizes exceptional innovation by a visionary health leader of international stature. 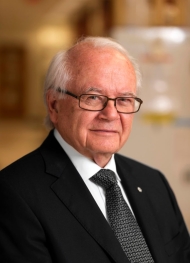 Dr. Lorne Tyrrell is a Distinguished Professor at the University of Alberta with major interests in the prevention and treatment of viral diseases and winner of the 2021 Friesen International Prize for Health Research.
Related Links:
Friends of CIHR Friesen Prize
Last updated: 07/26/2022 - 11:50
Back to top
McGill University
Copyright © 2022 McGill University
Accessibility Log in