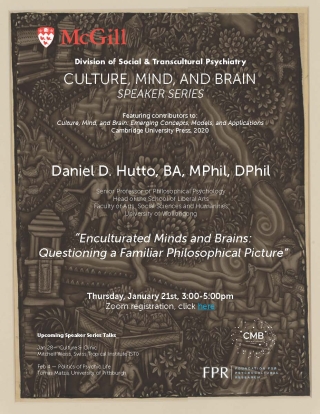 Daniel D. Hutto is Senior Professor of Philosophical Psychology and Head of the School of Liberal Arts at the University of Wollongong. He served on the Australian Research Council College of Experts, chairing its Humanities and Creative Arts panel. He conducts peer reviews for national grant awarding bodies worldwide such as European Research Council, Arts and Humanities Research Council, UK; National Endowment for the Humanities, USA. He has been involved in 12 funded research projects and is the author of award-winning, highly cited research, with 7 books (3 with MIT Press) and over 130 research papers in peer-reviewed journals and books chapters to his name. He is co-author of the award-winning Radicalizing Enactivism (MIT, 2013) and its sequel, Evolving Enactivism (MIT, 2017). His other recent books, include: Folk Psychological Narratives (MIT, 2008) and Wittgenstein and the End of Philosophy (Palgrave, 2006). He is editor of Narrative and Understanding Persons (CUP, 2007) and Narrative and Folk Psychology (Imprint Academic, 2009). A special yearbook, Radical Enactivism, focusing on his philosophy of intentionality, phenomenology and narrative, was published in 2006. He is regularly invited to speak not only at philosophy conferences but at expert meetings of anthropologists, clinicians, educationalists, narratologists, neuroscientists and psychologists.