Fibromyalgia is one of the most prevalent chronic pain conditions, negatively affecting the lives of 4-6% of the adult population worldwide. Fibromyalgia is a syndrome characterised by diffused pain, fatigue and cognitive symptoms. Despite years of research there are still considerable gaps in our understanding of this syndrome and in our ability to treat it effectively. In recent years there is growing appreciation of the critical role the gut microbiome plays in health and disease. This rich ecosystem of micro-organisms, living in and on our body is not only modeled by a variety of medical conditions, but also plays a role in pathologies pertaining to a wide range of medical fields. Of particular interest is the bi-directional interaction of the gut microbiome with the central nervous system. This so called gut-brain axis allows the gut microbiome to play a role in psychiatric and neurologic conditions. Could the gut microbiome play a role in chronic pain as well?

To test this hypothesis we explore the composition and function of the gut microbiome in a cohort of 77 women with fibromyalgia and 79 healthy controls. While the overall composition of the gut microbiome of patients was similar to that of controls, significant alterations were observed in the relative abundance of several specific bacterial species. The relative abundance of these species quantitatively correlated with disease-related variables such as pain, fatigue and cognitive dysfunction more than with any other variable, including demographic, anthropometric, comorbidities, medications and nutritional measures. Serum metabolomic analysis revealed significant alterations in the concentration of gut-microbiome derived metabolites including short-chain fatty acids (SCFA) and bile acids. These differentially abundant serum metabolites are known to be metabolized by the differentially abundant bacterial species identified in fibromyalgia patients, indicating altered gut-microbiome function in addition to the observed alteration in its composition.

To explore the possible causal role of the gut microbiome in the pathogenesis of fibromyalgia, we used fecal microbiome transplantation (FMT) to germ-free mice. FMT from 3 FM patients and 3 healthy controls were given to 32 germ-free mice. Mice receiving FMT from fibromyalgia patients showed significantly decreased thermal and mechanical thresholds and increased mouse-grimace scores when compared to mice receiving FMT from controls, suggesting higher susceptibility to both evoked and spontaneous pain. Minor alterations in sleep, cognitive and affective measures were also observed.

This seminar will be given online via Zoom. 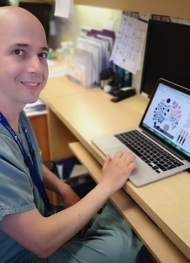