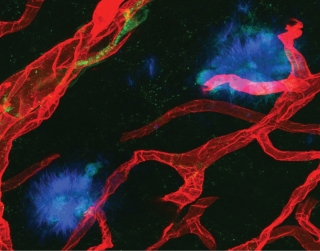 Nedergaard is a pioneer in the field of neuroglial signaling. She was the first to show that astrocytes can transmit calcium signals to neurons; that astrocytes regulate inhibitory neurotransmission; that they communicate by purinergic signaling; that they in live brain are activated by sensory stimulation; and that they regulate cerebral perfusion. Nedergaard also showed that astrocytes control the extracellular ion composition and thereby by a simple, yet powerful mechanism, can control neural circuit activity. Her collaborative studies revealed that the size and complexity of astrocytes increases across phylogeny, and that engraftment of human astrocytes enhances the cognitive performance of mice. Clinically-trained, she has identified a role of astrocytic pathology in spinal cord injury, epilepsy, ammonium toxicity, glioma invasion and activation of astrocytes in deep brain stimulation. Yet, her notable discovery is of the (glia-lymphatic) glymphatic system, a brain-wide fluid clearance system. She showed that the glymphatic system is activated during sleep and clears waste metabolites. Glymphatic transport declines in aging, chronic diseases, and sleep disturbances, thus linking its failure to an increased risk of dementing illness.

Her most recent work has highlighted glymphatic transport as the basis for acute post-ischemic cerebral edema, a revelation that has breathed new life into modern therapeutic approaches. In sum, Nedergaard’s work has revealed that astrocytes are active participants in higher brain function and critical causal contributors to brain disease, while laying out clear paths to fundamentally new therapeutic avenues going forward.

The image above shows glymphatic CSF delivery of an antibody (green) directed against amyloid-b binding amyloid plaques (blue). The vasculature is labeled with red. 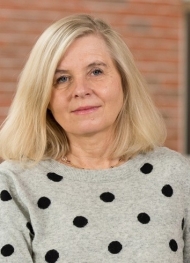