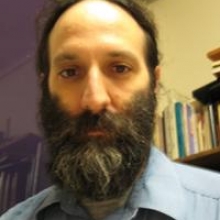 I am a professor of philosophy at McGill and also an associate member of the department of History and Classical Studies; I do about two thirds of my teaching at McGill in Philosophy, one sixth in Classics, and one sixth in Islamic Studies. I am also an honorary professor of philosophy, and a member of the faculty of the Graduate Program in Ancient Philosophy, at the Humboldt University in Berlin, where I held a regular chair from 2011 to 2015. I normally spend every summer in Berlin, where summer is a regular semester, and I usually teach one course there each summer semester, in English, as well as supervising graduate students at both universities. Many of my papers can be found on my Berlin website.

I am currently revising a book-manuscript entitled The Aim and the Argument of Aristotle's Metaphysics, a draft of which can be found on the Humboldt University of Berlin website. I am also revising a draft of a book called Feuerbach's Theorem: an Essay on Euclidean and Algebraic Geometry. I am also working, with Calvin Normore, on a book to be called Nominalism and Realism, from Boethius to Hobbes, and am editing and translating the pseudo-Aristotelian On Melissus, Xenophanes and Gorgias for the Loeb Classical Library volume "Aristotle": Minor Works, edited by Robert Mayhew. I am also publishing a series of articles on the logical syntax of being and unity (notably on the origin and development of the idea that existence is a second-order predicate) in medieval Arabic and Latin philosophy, which I hope eventually to collect as a book. I am also engaged in shorter research projects on pre-Socratic philosophy (Anaxagoras and especially Empedocles), on Aristotle's Analytics, Physics, and Poetics, on neo-Platonic metaphysics, on ancient music theory and arithmetic, and on Arabic modal syllogistic.

Ancient Philosophy (I have taught all 8 of our courses in ancient philosophy, plus seminars on a wide range of ancient topics)
Medieval Philosophy (both Arabic and Latin)
History and Philosophy of Mathematics