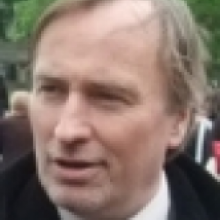 Prof. Buckley is former Chair of the Department of Philosophy. From 1986 to 1992 he was a scientific assistant of the Husserl- Archives at Louvain, which engages in editing and translating the unpublished works of Edmund Husserl. His research is focused upon the phenomenology of Husserl and Heidegger, with an interest also in its historical antecedents and subsequent developments in 20th century French and German philosophy. He is the coordinator of a FQRSC (Fonds quebecois de recherche sur la societé et la culture funded) research team for 2002-2005 with colleagues from the Université de Montréal on "Phenomenology and Ethics."

One of Prof. Buckley's major contributions to research is his Husserl, Heidegger and the Crisis of Philosophical Responsibility (Dordrecht: Kluwer, 1992). In this text, he demonstrates that the crisis of reason is a theme which can be traced through all of Husserl's works from his early concerns with the lack of foundation in arithmetic and logic to his explicit concern in the 1930's with the collapse of genuine rationality in Europe. One of the main accomplishments is to show clearly a fundamental unity running through Husserl's philosophical life. This is a direct challenge to many previous interpretations of Husserl's work, which tend to compartmentalize the various stages of his thought, often with a view towards radical shifts or ruptures. Prof. Buckley's treatment of Husserl opens up an avenue for a fruitful and novel re-consideration of the philosophical relationship between Husserl and Martin Heidegger. It is within this context of the development by Heidegger of Husserl's phenomenology that much of Prof. Buckley's recent work occurs. Within this research, the emphasis is clearly upon an ethical and political reading of both Husserl and Heidegger (cf. "Heidegger and the "End" of Ethics" in Moral Philosophy in the Phenomenological Tradition, ed. J. Drummond and L. Embree (Dordrecht: Kluwer Academic, 2002), pp. 197-228; "Husserl and the 'Infinite Task' of Hermeneutics" in Between the Human and the Divine: Philosophical and Theological Hermeneutics, ed. A. Wiercinski (Toronto: Hermeneutics Press, 2002), pp. 66-80; "Rationality and Responsibility in Husserl's and Heidegger's View of Technology" (Philosophy of Technology: Proceedings of the American Catholic Philosophical Association, 70 (1996), pp. 121-134). Among the elements of such a reading are:

(i) conceptions of the subject: in "La notion d'authenticité chez Husserl et Heidegger" (Philosophiques, 20 (Automne, 1993), pp. 399-422), Husserl's goal of a fully rational subject is shown to re-inscribe a type of thinking which is itself responsible for the crisis of reason; "Stromdichtung and Subjectivity in the later Heidegger" (Self-Awareness, Alterity and Temporality, ed. D. Zahavi (Kluwer, 1997, pp. 231-238) treats Heidegger's view of the subject in the context of his reading of Hölderlin.

(ii) the ways in which certain views of the self and self-identity are linked to visions of the community: "Husserl's Rational Liebesgemeinschaft", (Research in Phenomenology, 26 (1996), pp. 116-129), "Husserl's Notion of Authentic Community" (American Catholic Philosophical Quarterly, 46 (1992), pp. 213-227); "Political Apects of Husserl's Call for Renewal" (Transitions in Continental Philosophy, ed. A. Dallery and S. Watson (Albany: SUNY Press, 1994), pp. 3-20), and "Personality of Higher Order: Husserlian Reflections on the Québec Problem" in Phenomenology and Politics, ed. L. Embree and K. Thompson (Dordrecht: Kluwer Academic, 1999), pp. 105-120 ). In these papers, Professor Buckley considers from various angles the implications of Husserl's reflections on authentic communal life as analogous to the life of the genuinely rational individual.

(iii) the particular role the "estate" of philosophers might play in that community: "Husserl and the Communal Praxis of Science" in Husserl and the Sciences, ed. R. Feist (Ottawa: University of Ottawa Press, 2003 - forthcoming), 15pp., and "Husserl's Göttingen Years and the Genesis of the Idea of Community" in Selected Studies in Phenomenology, 20, ed. L. Langsdorf and S. Watson (Albany: SUNY Press, 1998) treat some of the sources for Husserl's sense of the community of philosophers as a paradigm for a genuine community.

(iv) history: in "Geschichte der Philosophie und Philosophie der Geschichte" (Annäherungen an Martin Heidegger, ed. H. Schäfer (Frankfurt: Campus Verlag, 1996), pp. 185-208, and in forthcoming articles on "Husserls Concept of History Revisted" and "Husserls Critique of Tradition," Professor Buckley delineates some of the most important contributions phenomenology has to make to an understanding of history.

Since 2000, Professor Buckley has been heavily involved with a McGill-based Canadian International Development Agency project focusing upon higher education in Indonesia. He has twice been guest-professor for a semester at the State Islamic University (UIN Jakarta) and has been a consultant on curriculum design and implementation. Indonesia has also proven an outstanding phenomenological "laboratory" to extend some of his notions on identity, community and history (cf. "The Idea of a Religious Culture: Pre- or Post-modern?" in Islam in Indonesia: Islamic Studies Social transformation , ed. Fuad Jabali and Jamhari (Montreal/jakarta, 2003) and "Phenomenology and Politics: Husserlian Reflections on Reformasi," forthcoming in Refleksi: Jurnal Agama dan Filsafat) and to engage in joint-research projects on "Ethics and the Environment" and "Democracy and Citizenship".

Professor Buckley teaches courses in his area of specialization, in existentialism, and an introduction to philosophy. During his sojourn in Belgium, he scored a few goals and earned many penalty minutes while playing left wing for the Leuven Ice Devils of the Belgian Hockey League. With Professor Lewis, he forms part of the "geriatric line" on the Department of Philosophy's intramural ice-hockey team.